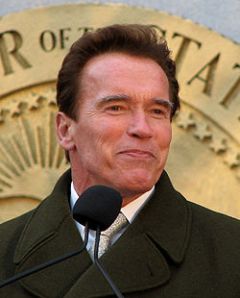 election wasn’t a referendum, it was a call for action from an actor.    One day you were watching Day’s of our lives and the next moment you weren’t and gone was your lights.    No Power?   Rolling brown outs…  What the hell……

Hitler had a larger fan base than then governor Grey Davis.   He was responsible for everything, the fat content in Snickers bar and the Pontiac Aztec and had to go.

Legitimate  candidates  stepped  up from both sides  but it was difficult to compete with the Terminator….  Unlike the other candidates,  Arnold had no real plans to fix our energy crises…..and told the voters ,elect me and then I will tell you my plans once I’m in office and in record numbers the electorate turned out for the Running Man.   For a second time in the states history, elected an Actor and Sacramento had a tourist attraction.

Sometime you get what you ask for…..

He made good on his promise for repealing an unpopular increase in the vehicle registration fee  the problem was that increase was needed for the state’s budget  and he didn’t have an alternative.    He has rejected luxury taxes on the wealthy, his reasoning the taxes wouldn’t bring in enough revenue to be affective.

Today, the state and its assets are up for sale.    Services for the poor and middle class have been slashed.   Funding for public education has been cut .  Public Schools are being closed and consolidated all over the state to make up for the short fall.    Taxes for the cities has been cut.

In 07, the California Transportation Association, a coalition of local transit agencies,  like MUNI in San Francisco, RT in Sacramento and  La’s Metro, sued the state,saying the repeated raids on transit funds were illegal under rules set by Proposition42 and other transportation funding  measures passed by the voters over the pass 10 years.   The court agreed and last year ordered the state to pay back 1.2 billion dollars.

So far, none of it has been paid back , and transit advocates say it probably never will be if the governor’s gas tax scheme becomes law.

Meanwhile, transit agencies are cutting service, eliminating lines to make up for the short fall.

8 million Californians take one form of transit,  if your concerned email your elected representatives.