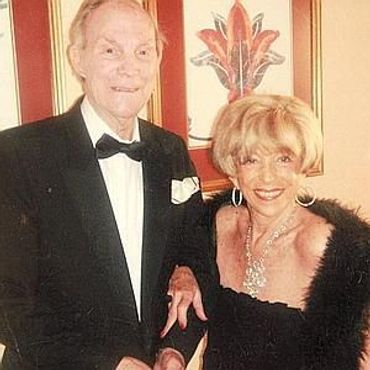 FEISTY: Frederick Evans and Gloria Sher on the Queen Mary 2, which they say they were kicked off of for standing up to anti-Semites who whined about Jews on board.

A wealthy Manhattan couple was forced to walk the plank during a cruise on the Queen Mary 2 — after getting into a bizarre fight with a fellow passenger, sources said.

Broadway producer Gloria Sher, 82, and her husband, Frederick Evans, 91, said they were ordered off the luxury liner after their obscenity-filled argument with someone they claim had made an anti-Semitic remark during a stately black-tie dinner.

The couple almost wound up stranded in a remote port in Quebec as punishment for their outburst. At the time, they were only days into the $20,000, five-week cruise.

They were eventually allowed to remain aboard for six more days after some passengers came to their defense, but they had to stay inside their cabin — under house arrest. Even their booze was confiscated.

“I was treated with no respect and unbelievably rude and shockingly terrible,” Sher said. “I’ve been sick ever since. It has ruined our lives. It’s changed us forever.”

Minutes into their meal that day, the couple said, one of their dining companions told Sher to shut up, then added, “There are too many Jews on board.”

Sher, who is Jewish, admits she got angry, shooting back, “F- – k you!” and “How dare you insult me!” before storming off to her stateroom.

The next morning, the ship’s captain, Commodore Bernard Warner, knocked on the couple’s cabin door.

“You insulted a fellow passenger. I’m going to have to ask you to leave the ship,” he said, quoting from a manual.

The couple, who met aboard the Queen Elizabeth 2 in 1991 and knew Warner from several trips on the QM2, were stunned, especially when he insinuated that the 95-pound Sher had pushed someone.

“He told two seniors we had to get off in Quebec and make our way home,” said Sher, who produced the Tony-nominated musical “Shenandoah.” “We begged him not to do this.”

Evans, a former British navy man, said the commodore acted like a modern-day Captain Bligh, refusing to even listen to their side of the story.

But one passenger told The Post that the couple was at least partly to blame. Sher tends to get belligerent when drinking, the passenger said, recalling that she went on a rant one night because a lounge’s piano was closed.

Another passenger, however, felt that the couple was definitely mistreated. Fred Bangasser, a retired Army colonel from Austin, Texas, who had befriended them during the cruise, tried to intervene when the commodore was giving them the heave-ho.

“This is deplorable,” Bangasser said. “I felt that they were absolutely treated without appropriate dignity.”

Warner allowed them to stay on board until the ship returned to New York, but only if they agreed not to leave their room.

The elderly couple spent six days as shut-ins, although they did manage to slip out of their suite once in a while.

It was hardly the royal treatment for two people known to make bold claims. Sher, for example, likes to tell people that her hubby is the illegitimate son of the Duke of Windsor, the abdicated King Edward VIII, as well as a British knight. Neither claim could be confirmed.

The Cunard cruise line — which would refund the couple only $839 — said in a statement that “Sir Evans and Lady Sher engaged in multiple incidences of disrespectful and disruptive behavior towards crew members and other guests.”