The Nissan Cube has been around for a couple years.  While I have admired the unique shape of the vehicle, I never liked the front end, it looks like a cartoon car.

Yesterday a friend called and  asked if I would join him to meet a mutual friend from Norway, who had a four hour layover at San Francisco International.  My friend is 6.6 and drives a Ford Explorer.    So I was surprised when he pulled up in a blue Nissan Cube. 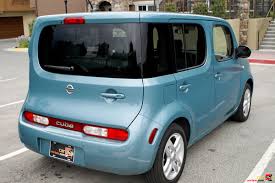 I was also surprised to see two other people in the car which meant that I would be siting behind my 6.6 friend, I’m 6.4.

My friend commutes from Placerville to West Sacramento  his 2005 Explorer was averaging 19 miles to the gallon and his fuel cost a couple of weeks ago was about 137 a week.    He needed a car with better gas mileage however being 6.6 and over three hundred pounds comfort was important.  His colleague had one and suggested he try it.    He said he had more headroom in the Cube.    He said it cost him $61 to fill the Cube  and his weekly fuel cost is about $90 a week.

With over 1300 of grade a menfolks, the car rode smoothly on I-80 with four large men in it.  There was a bit of  wind noise ,however no had to yell.    No one complained about seat comfort.   The driver floored it to make it over the hills between Fairfield and Vallejo.

The interior seem plasticly but the room was immense.

The vehicle cost him less the 18k fairly loaded.

When he parked the Cube at the airport, it was amazing how small the car was, about the length of a Toyota Corolla.

A lot of big guys drive pick up trucks and SUV’s for the room.     I’m 6.4 and I had more head and leg room in the Cube than the Cadillac Escalade.

So if your a big guy or a person who needs a spacious vehicle ,take a look at the Cube.