Sacramento’s  Average is $4.17 per gallon 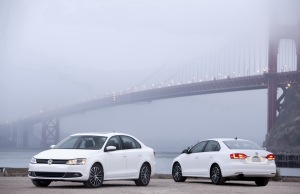 The Toyota Corolla was never an exciting car,it is very reliable, has good gas mileage and will safely get you from point A to point B.  The Corolla is the benchmark. For more than 30 years millions of people all over the world buy Corolla’a and replace them with Corolla’s.

Fans of the Volkswagen Jetta, wanted and received something more.   What they got was  a ,good handing car made with good materials, a fine entry level German car.  However, the older Jetta cost more than similar sized cars.

Volkswagen wants to be a major player in the world car markets and wants a larger share of the North American market.

To be competitive, they needed had to decontent (Auto industry term for removing features from upcoming model years), the Jetta.  The 2010 Jetta had a fully independent suspension, the 2011 has a beam in the rear.

The 2011 Jetta is all new, its larger than the 2011 however, the hard plastic and other  materials used  and the switch gear is inferior to the 2010 and the current Volkswagen Golf. 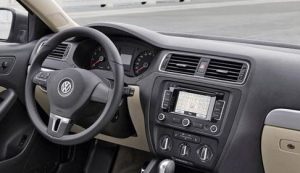 The rest of the news isn’t as good.    The base model comes with  115 horsepower four cylinder engine, not competitive in this class.   I was hoping to test drive the four cylinder.  What I drove was the  170 hp 2.5, 5 cylinder with an six speed automatic transmission.

The car drove well, I especially liked the steering and it accommodated my 6.4 widebodied frame well and I could fit in the rear. The ride was soft, fit and finish was okay.  The transmission seemed  well suited for the 2.5.     Most buyers will  opt for the five cylinder  with the 2.5 jetta, those wanting more power can find it with the optional turbo, those looking for the ultimate in fuel economy can opt for the TDI diesel later this year. Those options pushes the needle upward.

The 2011 Jetta is a pleasant car, but its  behind the competition, in base horsepower and overall fuel economy, cars in this segment is averaging 38 miles a gallon where the  Jetta’s averages 32 miles per gallon ,about the same as a midsize car.     The Koreans and the Americans has step it up.  With new newly designed Honda Civic’s just hitting the showrooms and an upcoming Corolla redesign is a year off.   According to Consumer Reports, the reliability of  the last generation Jetta was been poor to average.

Volkswagen wants to be a player,and hopes  to sell 800, 000 cars a year in the US by 2018.  To  to compeat with the  Americans, Japanese and the Koreans who currently sell more cars in the US than Volkswagen, the company will need to step it up.   The hard plastics and other materials used in the current Jetta was closer to the old Chevy Cobalt.

Hyundai successfully remade itself, Ford is making solid reliable cars, and one company, Suzuki is  generating Buzz.       Volkswagen needs a  Hyundai Genesis a breakout vehicle, the Jetta isn’t the car.