You can’t drive far in the U.S. without seeing a Toyota Camry, Honda Accord or Ford Fusion.

Midsize sedans have been America’s favorite cars for decades. That’s changing. More people are choosing small cars like the Chevrolet Cruze and even smaller ones like the Honda Fit because they’re worried about gas prices and car payments. There’s another reason, too: Small cars are no longer the cramped econoboxes of the 1980s and 1990s, and they have many of the same features as larger cars.

Compact cars will outsell midsize ones as early as this year, forecasts J.D. Power and Associates, a marketing information firm. That hasn’t happened in at least two decades.

Just five years ago, automakers sold nearly 250,000 more midsize cars than compact cars in the U.S. Gas was cheaper then, and automakers had fewer small models to sell. But by 2015, J.D. Power expects compact and subcompact cars to command 20 percent of sales, while midsize cars will account for just 14 percent.

For most of the past 15 years, the Camry has been America’s best-selling car. And Toyota wants it to stay that way. This fall, the Japanese company released a new version that increases fuel economy to 35 miles per gallon (15 kilometers per liter) and sells for even less than the old model. But it’s facing tough competition from smaller cars such as the Hyundai Elantra, which gets 40 mpg (17 kpl) and costs $5,000 less. Elantra sales surged 46 percent to 161,000 through October, while Camry sales fell 9 percent to 251,000.

The Elantra isn’t the only competition. For a brief period this year after the Japanese earthquake, the Chevrolet Cruze unseated the Camry as the best-selling car in the country.

Melanie Jackson, 29, a paramedic, went shopping for a midsize car last summer but wound up with a two-door Honda Civic coupe because she was wowed by its fuel economy. She says the Civic can easily fit her three sons, their backpacks, football equipment and groceries. And she averages 38 mpg (16 kpl) and spends only $30 a week on gas.

“I forget how to put gas in the car because I do it so rarely,” Jackson says.

Here are some reasons for the growing appeal of small cars:

Today’s small cars have all the bells and whistles

Unlike the stripped-down models of earlier decades, small cars offer all the amenities of bigger models, like leather seats, satellite radio and keyless entry. 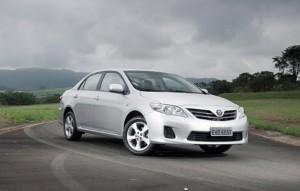 Buyers can get a Nissan Versa hatchback with a navigation system for a little more than $15,000. Downsizing Baby Boomers, as the more than 76 million Americans born from 1946 to 1964 are known, and tech-savvy young drivers don’t want to compromise on features when they get a smaller car, so automakers are responding.

Mara Landers, 35, an assistant professor of mathematics at Los Medanos College in Pittsburg, California, drove a 1998 Civic that was so spare it didn’t have a radio. She traded it in for a 2009 Civic with power windows, keyless entry and a digital dashboard display.

“The new Civic really feels like a luxury update of the old one,” Landers says.

An Elantra starts at $16,445, but can be loaded up with leather seats, a navigation system, a rearview camera and other features that raise the price tag to $23,305. To get a midsize Hyundai Sonata with those same features, buyers have to pay $6,000 more.

The 2012 Ford Focus compact is nearly 8 inches (20 centimeters) longer and 5 inches (12.5 centimeters) wider than the Ford Escort — the car it replaced — was a decade ago. That means buyers don’t need to move up to a midsize just to stretch their legs. Adding inches here and there is an easy way for carmakers to increase a vehicle’s perceived value. The difference between compact and midsize cars also is narrowing. In 1992, the compact Corolla was nearly 17 inches (43 centimeters) shorter than the Camry. But the Corolla has stretched, and is now just 10 inches (25 centimeters) shorter.

The Environmental Protection Agency defines compact cars as having 100 to 109 cubic feet of passenger and cargo space, while midsize cars have 110 to 119 cubic feet. That gives automakers plenty of room to play with.

One reason companies are racing to improve their small car offerings is an upcoming increase in fuel efficiency standards. Carmakers have agreed to double the average fuel economy of their fleets to 54.5 miles per gallon by 2025. Companies will have to meet that goal with more efficient gas engines, hybrid technology and other methods. But they’ll also meet it by selling more small cars. The Ford Focus, for example, gets 5 more miles (8 more kilometers) per gallon than the Fusion.

That difference is important to many cars buyers because gasoline prices remain high. At an average of $3.34 a gallon (88 cents a liter) nationwide, regular gasoline costs 16 percent more than a year ago. And it could reach $4 ($1.05 a liter) next spring, a level it almost touched earlier this year.

Of course, it’s too early to declare the death of the midsize car. Sales have dropped before, most recently with the rise of crossover wagons such as the Toyota RAV4 and Ford Edge in the last decade. Those vehicles combine the roominess of SUVs with the nimbler handling and higher gas mileage of cars.

And midsize cars remain very popular in the U.S. Five of the 10 top-selling vehicles in October were midsize sedans, and sales actually grew during the recession as people downsized from even larger cars, such as the Toyota Avalon and Chrysler 300. However, small car sales grew faster.

Toyota, for one, isn’t predicting a big drop in sales of midsize cars over the next five years. One factor: As women make more money, they’re expected to move from small cars up to midsize ones, says Gregg Benkendorfer, Toyota’s national manager for product marketing.

But for now, small cars have the momentum. They are on dealer lots for less than a month before being sold, compared with more than six weeks for midsize cars, according to car information site Edmunds.com.

Jackson says two of her friends have downsized to small cars since she bought her Civic, and they’re as happy as she is.