My love affair with Chrysler began with the 1968 Dodge Charger 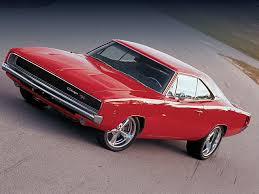 from its front end to its rear, its didn’t look like a GM or Ford, it was Mopar.   Of course some of my friends liked the square Roadrunner

the  corporate twin of the Dodge.   I was a Dodge kid until Chrysler introudced the Plymouth Superbird

sure Dodge had version called the Daytona, but they didn’t have the Road Runner on the front end on the wing. 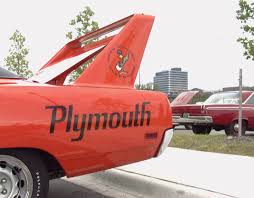 From the Cuda, to the Charger and the Superbird  Chrysler built over the top cars with large engines and bright colors 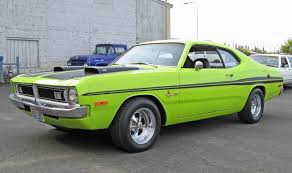 back in the day when fuel was less than a dollar a gallon (really grandpa? yes son…Really!).  A time when power and size where more important than MPG.

Then one day, the world changed.  The fed mandated safer cars and cleaner cars .  With the Iranian oil embargo  the United States realized how depended we were of the middle east for our fuel.  Gas jumped from 79 cents a gallon to over $1.50. the oil embargo resulted in fuel shortages   Americans quickly ran to smaller cars,  of the only the smallest manufacturer was ready.  American Motors.

By the late seventies   Chrysler fell off my radar screen, their cars became boring  My attention turned toward the  Japanese, who where then building swoopy small cars.

In 1979,  Lee Iaccoca went to congress and asked for a loan, without the loan, he told Congress, the company would go bankrupt.  The loan was repaid with interest before the loan was due.

Chrysler introduced the small boxy K cars, which went to underpinned larger and smaller Chryslers. The K cars was just what the company needed, compact cars with small engines.  By the mid 80’s, the  company hit a major home run after it introducing  the mini vans to the world, once again using the K platform.

By the mid eighties, Chrysler bought American Motors , the target was Jeep( the builder of the worlds first SUV).  Iaccoca wanted the Jeep Grand Cherokee they were developing.

The words Quality and Chrysler where never  found  in the  same  sentence.   However, by the early nineties Consumer Reports suggested the quality was improving.  The automotive press was once again looking at the new Chrysler and its innovative designs with many of the companies vehicles  earning awards.

In 1998, Daimler AG  the parent company of Mercedes Benz bought Chrysler.  On paper this was a good marriage, Daimler Chrysler.   Chrysler was building better and more appealing cars in the nineties.  Chryslers built  the first  crossovers ( SUV’s built on a traditional car platform) and Mercedes and its reputation could  change the american auto industry.  There were rumors, Daimler like Chrysler  wanted Jeep and its technology.   There were early problems of management styles Detroit vs Stuttgart.

In 2001, Chrysler eliminated its Plymouth Division.

The momentum at Chrysler slowed, the newer products seemed inferior to those they replaced.  The replacement for the popular Neon’s, the Dodge Caliber was ripped by the press and consumer magazines.      Decontenting of the large Chryslers were evident.  By 2003 ,it was clear the marriage wasn’t working Chrysler wasn’t making money,Diamler wanted out.

In 2005, the company found success with the full sized Chrysler 300 and Dodge Magnum which shared suspension,  transmission and other parts  from older Diamler products.  Praised by the Automotive press, for their  styling ,power and handling.  Despite the praise from the automotive press, Consumer Reports  placed both vehicles near bottom of their overall rankings

In 2007, I rented a Chrysler Sebring in Phoenix with 11,ooo miles on it.   I noticed a strap of wires hanging from under the dash, didn’t think much of it until later that evening when I stepped on the wires,at which point the car would not start.

In 2009, I rented a Dodge Charger(a corporate twin to the Chrysler 300) and was unimpressed, the car seem to come apart when passing over railroad tracks.

The last  insult to the company happened in 2007 when the fifth generation of the Chrysler Minivans were introduced, in a segment they created, a segment they owned, failed to catch on with buyers.  With the  Honda Odessy becoming the segments sales leader.

In 2007, Diamler sold Chrysler to Ceberus Capital  for less than they paid for the company.    By 2008, both General Motor and Chrysler were out of cash.       The Government offer to bail out a restructured  General Motors.  The terms for Chrysler was different,money could be available if Chrysler had a suitor.

When President Obama’s auto task force initially suggested Fiat as a partner for Chrysler my immediate response was “your kidding right” ?

In America , Fiat had a poor reputation, the acronym assigned to Fiat was –Fix it again Tony‘  The pairing of two automakers with a poor reputation for quality didn’t make sense in this very competitive and crowded market.

In the marriage Fabbrica Italiana Automobili Torino received  35 per cent of  Chrysler with an option to increase its ownership and Chrysler will eventually receive  rebadged Fiats in the  2012.

What a difference a year makes

In 2010, Chrysler desperately needed new cars.  The  Ram debuted with good reviews,  it was Motor Trend’s  “Truck of the Year”  The next new model the Jeep Grand Cherokee(the last collaboration with Diamler) an SUV was a year off.   With the exception of the new truck ,sales were down.

During the 2010 Super Bowl Chrysler introduced the 2011 Chrysler 200 which was essentially the much maligned Chrysler Sebring.

The 2 minute “Born of Fire”  ad featuring Eminem paid tribute to Detroit and what is was and returned pride for a City and a car company considered by many to be down and out.   Chrysler “Imported from Detroit.    The advertisement won five awards at the Cannes Lion International Festival of Creativity including the Best Automotive commercial.

The Ceo of Chrysler, Sergio Marchionne has painstakingly reworked  nearly every model in fleet,  tweaking suspensions  adding better quality materials  Improving fit and finish.   Vehicles long dismissed by the auto press like the Dodge Journey,Chrysler 200, and the mini-van have been revisited.  introduced a  new 300 and Charger two SUV’s The Jeep Grand Cherokee (which is mechanically similar to the new Mercedes M class), and Dodge Durango   With rave reviews.

the best Chrysler in decades.  The Dodge Charger is on ‘best’ several lists.

Last September, I drove a 2011 Dodge Charger, with the v6 and it left a very positive  impression.    I couldn’t believe the fit and finish and ride quality.  I ran the car over many railroad tracks throughout the Atlanta area without a single squeak.       For 2012, the car gets an 8 speed automatic  transmission shared with Audi increasing the fuel economy 15 percent.

While things are positive for Chrysler, they are less so for Fiat.   The initial goal of  selling 6000 units a month is far from being realized.  Fiat’s has a nationwide network of 130 dealerships, last month 29 of those dealerships did not sell a single Fiat 500 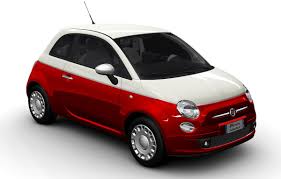 The European financial crises has crushed the auto industry as Fiat and other automakers have seen sales drop for 11 of 12 months with Fiat taking the largest hit.    Laura Soane, head of Fiat North America was fired.   Andera Formica head of Fiat Europe sales resigned.   Fiat fired it US advertising agency and had delayed the opening of its Alfa Romeo unit.  Recently the Fiat 500 received  a combined overall safety rating of three out of five stars from the National Highway Traffic Safety Administration. …

I am impressed with the New Chrysler, it has exceeded my expectations.  The Charger made my personal short list of replacement vehicles*.    Having said that with the exception of Ford, who’s quality ranking has dropped due to its automatic transmission in the new Focus and Fiesta and its my touch system. American  auto manufactures are still struggling, Ford alone has closed the gap in quality.     Consumer Reports suggests most of General Motors cars repair history is below average, including the new Buick LaCrosse and all of the Cadillac’s.

8 thoughts on “Chrysler? Chrysler! (Revisiting the Shotgun Marriage to Fiat)”