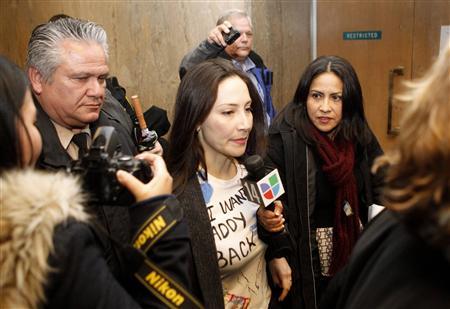 In the last installment (Part 3) of the best soap opera in San Francisco.  Eliana Lopez lawyered up.

For weeks, M’s Lopez said they had it all wrong.  The witnesses, the bruises, the video tape and her own statements were basic misunderstandings, oops (my bad!)

She  has  repeatedly refused to talk to investigators……..

Standing by (or behind) her husband, she has told the world (San Francisco and Venezuela )there were forces out to get her husband and the basis for the domestic violence, child endangerment were  politically motived.

In what may or may not be an about-face, Ms Lopez might coöperate with the San Francisco District  Attorneys office, if the office will grant her immunity.   Immigration and child endangerment are the issues.  If there was a physical fight, she could be hit with child endangerment as their child was present at the time.  The other, Ms Lopez has left her heart in San Francisco (who hasn’t) and doesn’t want to be shipped home on a slow bus  to Venezuela.

There will be no gums a flappin if she doesn’t get immunity as her hired mouth piece has told her to take the fifth!

The problem for the DA, they want the Sheriff, but  they could get played by the soap star. On the stand she could say  “its like I told you-he’s a lamb and has never ever touched me”

Who wants  tickets(to the hearing) to the best damm show in town?     I doublely do!!!!