What happens when the wife and the husband doesnt want the prosecution to use  the video tape  the wife  made to protect herself from her husband?

It’s SHOWTIME in the city by the bay.  The curtain rises today on the Best Soap Opera in Town.  The presiding judge is unknown, jury interviews should follow sometimes next week.

faces a year in jail and three years probation if convicted on all charges.  Since his arrest, Mr. Mirkarimi has attended nearly every court proceeding, often escorted by his own deputies. As the sheriff sat waiting on a bench behind the defense table at his arraignment in late January, cuffed inmates wearing county-issue sweat suits filed into the courtroom for their own hearings, passing just feet away from the man who runs the jail. 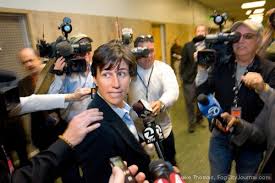 moved to have the video and statements by his wife neighbors  to be excluded.

In the video, (considered to be key evidence) Eliana Lopez pointed to her arm and said, “This happened yesterday, um, the end of 2011, and this is the second time this is happening. And I tell Ross I want to work on the marriage, we need help, I have been telling him we need help, and I am going to use this just in case he wants to take Theo away from me. Because he did, he said that, that he’s very powerful, and he can, he can do it,” .

Stiglich argued in the filing that exceptions that allow for out-of-court statements by a victim — such as spontaneous statements made under duress — do not apply to Mirkarimi’s case since Lopez’s statements were made many hours after the alleged incident.

Stiglich also argued that a 45-second video recorded by neighbor Ivory Madison of Lopez talking about the incident should be inadmissible because the video was meant to be used in a custody battle, not to prove she was criminally abused.

,similarly asked to have the video rule inadmissible because Lopez believed her conversations with her neighbor Madison, who is a lawyer by training and once interned at the California Supreme Court, were subject to attorney-client privilege ,even though Madison  is no longer a practicing attorney.

Remember, Lopez has denied that any domestic violence ever took place.

If your new to the soap-click the link below and catch up!