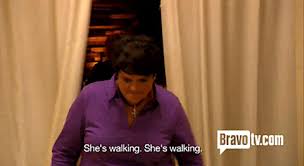 was gonna rip your head off and throw it into the street.   It was clear to anyone who had speakers, she didn’t care about jail time.  (Couldn’t you just see Rosie running the cell block)

Sunday, was about the same.  Teresa against the world ( I had a Dr. Phil Moment)*  this Reunion is one of the nastiest(and most are pretty nasty) on record.     You can’t take your eyes off Hurricane Teresa .  A friend in Boston said, her husband was not going to let her watch the show anymore because she gets so wound up-what some of  us call the Teresa effect.

A calmer gentler version of Rosie Pierri (Kathy’s Sister) talked about coming out to Kathy’s children and their mother.   Hurricane Teresa had negative memories of her own (go figure) and Rosie refuted claims of Kathy not accepting her as Lesbian.   Note: Teresa didn’t raise her voice  during the Rosie segment. (Rosie was inches away)

Some of the  show was eaaah boring…

Melissa Gorga (tears and smudge proof makeup)  saying shes’ moving because she doesn’t want her children to go with Teresa’s (their cousins) children.   Bullshit!!!   She’s moving because she and her husband can’t afford the house their in.   Perhaps it slipped her mine the house they moved into was for sale at the time they moved in.    They wanted to present a TV  image so boo friggin hoo!

Rosie and Kathy and Jacqueline told their own versions of Teresa’s stories….yawn…….

Juicy Joe and the phone call

Ladies and Gentleman, appearing for the first time in RHONJ history is Joe Giudice (Juicy Joe to some) and Teresa husband.

The man of the hour was sweating bullets, all eyes were on him..  The room is silent.

Who were ya talking to Joe?

Joe said he was talking to a friend and old friend “Alby” who takes care of things for him and he regrets calling his wife a cunt. He doesn’t know where that word came from?     None of the housewives were buying the Alby story. Joe went on to say calling  his wife “that word” resulted in three days of arguments and several pieces of expensive jewelry.

“That thing cost me a lot of money,that stupid word  ” But Joseph,when did you get a job?

Former best gal pal Jacqueline Laurita, eyes nearly rolled off the sofa. No longer a delicate wall flower, Jacqueline says Teresa and Joe not only hurl expletives at each other on the regular. They also punch each other, and he has cheated on her several times. (Standing up and applauding Jacqueline’s newly installed backbone.) At one point, a classy Juicy Joe belches (gotta love him) Red Bull.

Teresa is very unhappy.  Joe is the love of her life,their relationship began in public school.  The show is a blessing and a curse for her and a Bonanza for Bravo.   America has watched her world crumble.  She was caught off guard by  Joe’s financial troubles, his lawsuit ,bankruptcy and this was in the first season.

By the second season, she had written a best selling cookbook   Meanwhile her husband was arrested for drunk driving and loses his license. Then there are the nasty and persistent rumors of  other women.

The third season her brother Joe and  his family and her cousin Kathy and her family was added to the cast.

Fourth season ,more problems with Joe, who was arrested for driving with his brothers drivers license and now faces up to 10 years in jail .  Meanwhile she has written two other Best Selling cookbooks and was a contestant on Celebrity Apprentice. Teresa Giudice sells a lot of magazines. 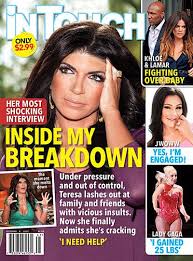 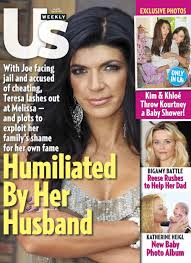 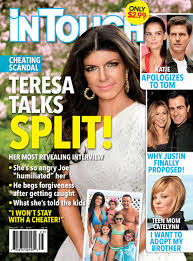 She is smitten with celebrity, in-spite  of what it does to her friends and family. Most of the articles are written by others….

Caroline Manzo last night said………”Teresa, when we die ,the viewer will not be at our funeral ”

Was a stretch…… Wasn’t worth the hype…..  Didn’t have the same intensity as part one. We will see at the water cooler.   Part One was a winner for Bravo, six million people watched.

The tease next week is the men.  The Joes (will there be a punch of two?) and the Manzo’s and yes I’ll be there.