Bosses accused her of giving away food, even though it was paid for, and she was fired for gross misconduct

A McDonald’s waitress claims she was sacked for sprinkling extra chocolate topping on a McFlurry dessert. Sarah Finch, 19,

was asked by a workmate to make her a “nice one” of the  ice creams.

But even though her colleague paid for it, bosses accused her of giving away food and she was fired for gross misconduct.

Now Sarah is taking McDonald’s to an employment board  for unfair dismissal. Ms Finch states in her application: “I was accused of stealing food. “The issue was that I had done this in response to a specific request for someone I actually knew. “Had it not been in response to a request, or it was someone I did not know, then I do not believe there would have been even a warning.

Before she was sacked from her  job Sarah, of Kidwelly,England  near Carmarthen, was described as an “exceptional employee”.

But Ron Mounsey, the director of the McDonald’s in Llangunnor, wrote to her mother  and tribunal representative Tessa: “She has admitted giving away food without receiving payment. “This is classed as gross misconduct as per my employee handbook, the consequence is dismissal.” Sarah’s tribunal will be heard in Cardiff at a date to be fixed. 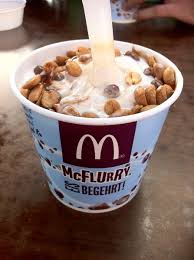