That’s what happen to me…

It was the summer of 2000, my friend and I  drove from NYC to Toronto    In Toronto ,I went blonde.  When we returned to NYC we went clubbing in Chelsea, and a man walked up to me and said(in a very thick accent) he would like to cast me.  Cast me?  This is New York City.  Cast me?   Before I could reach for my pocket taser, an Asian man in all black with round glasses sporting a  severe German haircut, said he would like to cast me, he was an artist.    Cast me? well…. before I could feel special, he said (with a very thick accent) , I like you because your the biggest guy here.    Perhaps Mona was the only woman in the village without scurvy.   His assistant gave me a business card and said call him tomorrow.

Cast me, wonder if its stage, screen, or a commercial?

My dear friend, a neurotic  New Yorker said your not going alone!  it could be one of those Snuff movies were they kill somebody !  JP has always been a source of comfort to me. (Not!)  The address was an art gallery in the village.  So, he said.. come on….. this is NEW YORK!

The next morning I called the Gallery, they wanted to cast me in fiberglass.  (It will be Letterman’s loss)  They wanted to cast me on Saturday, unfortunately  I was returning to Sacramento Friday.  Sacramento? the voice on the phone?  yes Sacramento, California    Thinking to myself-I’m sure they’ll find a another big guy.     Can you hold on? yes….   How soon can you come back to New York? ah two weeks?   Perfect.   We will pay for your tickets and hotel  and you will be paid 500 for your time.

All right now!  A ticket back to NYC, hotel ,limo ( I assumed they wanted me-what’s the cost of a limo for a model).

Strip down to your shorts…  she said  Huh?    Yes to your shorts and get on the table said one of the two ladies at this studio across from Madison Square Garden.   He (Ugo) wanted two casts of you .   Bowls and Buckets of warm water (oh good-warm water=erection) and strips of paper like in school.   After the ladies manipulated my body the process began.    No tent was pitched.  The ladies quickly worked up my thighs. Warm water becomes quickly becomes cold water.  They were gentle as they reached my man unit.     Wonder if Tyra (of course she doesn’t have a man unit) suffered like this?  The life of a supermodel.

Not sure it were my nipples or the goose bumps that gave me away.  The ladies looked for a robe before he next cast.  The best they could find was a short rope that partially covered my arms.    Warm water and repeat,  a rinse and it was off  to Kennedy.   My ride was a Towncar….  The Haitian driver was friendly and offered his copy on the New York Times.   Somewhere on the expressway the conversation turned to politics, he had nothing but praise for Al Gore, he said Gore was the only politician that cared about Haiti.

At JFK, I was a hit.. A big black man in all black with blonde hair.   On the America West jet, kids turned around…    Yes they think I’m famous.   I was fine being a superstar until I realized I had a small tail  8 or 9 sheets of toilet paper was flowing  out  my pants as I walked.  Great!

Weeks ,months past before I called the gallery to see whatz up with my check.   I was secretly hoping they would fly me back for the unveiling.   That dream soon faded.

Five hundred bucks, and I needed every penny.   From time to time I would scan  the Times for an art review.  Then one day….

ART IN REVIEW; Ugo Rondinone — ‘A Horse With No Name’

The extravagantly talented Ugo Rondinone has more creative energy than he knows what to do with. Here he follows up his last wildly heterogeneous show of video, painting and whatnot with a more focused but still disjunctive installation and an outdoor rooftop sign. Visible from the street, the sign spells out the show’s title — also the name of a Neil Young song — in a rainbow arch of candy-striped letters.

Indoors, two long walls covered with curvy mirror fragments frame an open space where three life-size, fat, mannequinlike clowns sleep in various postures. Wearing fur or fabric garb, the clowns add a surrealistic note; but they distract from the most interesting aspect — an elliptical dialogue between a man and a woman issuing from speaker holes in the walls. The conversation sounds like a brief encounter in a David Mamet film: ”What do you want? What do I want? Yes, what do you want? I don’t want anything. Really? Yes, really. Why? Why what? Why don’t you want anything? Because I don’t think anything is going to help.” That’s about half of the endlessly repeating loop.

Being entirely enclosed by four walls of shattered reflections with this maddening, flirtatious mirror-talk could be a powerful experience. As it stands, dramatic intensity is diminished by the installation’s open format and the comparatively less interesting clowns. As for the outdoor sign, it suggests that Mr. Rondinone will not have fully realized his potential until he’s made ”Moulin Rouge 2.” KEN JOHNSON

My casts has traveled the world. to many good notices,  however, you do remember words like grotesque , fat and huge.   I’m convinced  Mona Lisa went through something similar….. Why didn’t you wear that Royal Blue gown?  Whatz up with the smile?  Was it that time of the month?   How could you let him make you so ugly?

Despite the reviews, I was proud of the pictures and from time to time I would go the internet and show a select few the pictures

I’m the clown in yellow and clown on its side 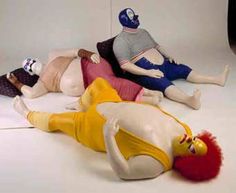 I showed my boss the clown on its side and she said who was the fat pregnant woman?
One day, I was surfing the net and came across this….

I’ve learned the other one sold for nearly as much.   My friends were outraged! What were you paid? You should hire a lawyer and sue!

I thought to myself, what was Mona paid?  a Goat? a loaf a bread and cheese?  What was she paid.?

Da Vinci,  didn’t know  if the painting would be revered or end up at some Salvation Army bin, in Palermo.

Like me she was just a model, when Leonardo asked her, she said, cheese huh-well OK!   Cut, print, the end.