Buying a fast compact car from American and Japanese manufacturer usually means you have to buy a car that says look at me.   The colors are amped up and most have large spoilers to remind you this is not your pedestrian small car.  If the color and the spoilers weren’t enough the manufacturer usually add five or six badges to  remind you you’re in  something quicker . 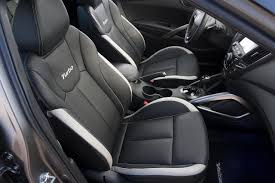 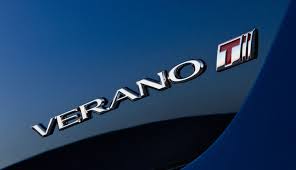 The ringer…  Unlike most small powerful cars, the small “T” is the giveaway.  No screaming colors, no major emblems a small “T”

In someways the Verano pays homage to Buick of old. 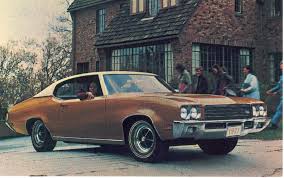 Back in the day, if you wanted a sporty GM midsize car, your first stop was at the Chevrolet and Pontiac Dealerships.  It was about the Chevelle SS or the GTO or you stopped at Oldsmobile for the Cutlass.   But no one, no one stopped at Buick.  You could end up with a car that looked like your grandparents car. Some people called the Buick Skylark the upwardly mobile secretary’s car.

But underneath the hoods of some of those cars was Buick potent 455 V8.   For those people under 35 that was 455 cubic inches(7.5L) of raw American Powah!   It was the car you chuckled at until its tail lights became history.

GM’s  2.0 Ecotec engine is shared with the Cadillac ATS, Chevy Malibu, and the Buick Regal GS.  In the Verano its simply math. Take one of GM’s most potent engines and squeeze it in a 3300 pound car.

The result is car that is slightly slower than the Baby Caddy,  yet  faster than Acura TSX, Audi A3, Volkswagen CC, Volvo S60 and even the Mercedes-Benz C250 all for just over 30k.

This is my friend, James car.    A Camry driving urbanite.   The Buick would be step up in status and the car takes up less space than his beloved Camry.   James would never drive a car that drew attention to itself and if he really wanted to, he could order the Verano in Xerox white.

The interiors are tastefully done.

The Verano would takes James to an unfamiliar land.  A land where cars are fast and fun to drive.  He could find himself at a stoplight, next to some pretentious car, well …..we know the rest.

The Verano is a close cousin to the Chevy Cruze.   A few years ago I test drove the 2011 Cruze and called it the Caddy of small Cars.   The Verano takes that up a couple of notches.   The materials are better, it  uses a thicker glass, making the car very quiet.  They don’t share the same engines.

Like the Cruze, it isn’t the roomiest car for this 6.4 man and with six footers up front, any rear passenger is not likely to speak to you again in life.  However, if your 5.10 and  under, its cumebiya

Driving the six speed (yes another Buick with a stick-could you believe? ) was challenging for my Godzilla like frame, there was just enough room.   But the power made it fun. (yes James-a six speed auto is available)   Steering was good  the ride was a bit soft but not grandpa soft.

Sucks to be Grandpa

Poor grandpa, for years he could depend on America to build a powerful straight line car that had a soft  and floaty ride.     Buick Lucerne, Cadillac DTS, Fords Crown Victoria and the Lincoln Towncar and their soft suspensions have all gone to the parking lot in the sky.    GM , Ford and Chrysler  has abandoned him.  Today his choices are few if he wants soft and floaty, its  Toyota. (for now)

The 2013 Buick Verano Turbo was another fun Buick. (did I say that?) and worth a test drive  if you’re looking at cars like the Acura, or Audi A3.