When you think of Lincoln, you think  Towncar and Limos cars that whisk you away from airports or take you to posh events.  But never a car you would own.

Buick and Cadillac has abandon grandpa, gone is the floaty numb cars of old.   The Lincoln Motor Company (new name) wants to change your perception on its cars and tomorrow nearly 200 million people will see the car they hope will change the direction of Lincoln.

The 2013 Lincoln MKZ  shares its platform with the super hot and sexy Ford Fusion.

Both cars have 112 inch wheel base, they share 6 speed automatic transmissions and two engines including a hybrid. From there  Lincoln goes into  another direction.  First offering 3.7 v6 generating 300 horsepower.  Then offering a knob free car

with a push-button transmission

(for those young enough to remember push-button transmissions from the fifties) , a huge panoramic sunroof 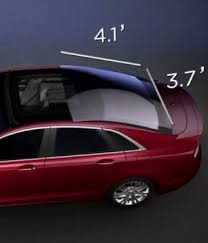 .    Add Active Noise Control and magnetorheological suspension the MKZ  may be on to something .

Like the Fusion, the MKZ is a sexy car.     The front end of the Fusion is undeniably sexy, on the MKZ its the rear end….

Nearly every manufacturer from Mercedes to Honda has at least one hybrid in its fleet .  Later this year you may see diesel engines  in Audi’s sold in the US .v When it comes to hybrids Toyota owns the market.   Toyota sell more hybrids then all  automaker combined .

Ford wants in  and Toyota should be a little concerned.   The Toyota Prius is the best selling car in California.   The styling of the Prius ins’t the cars selling point its MPG.  Ford approach is different from the other automakers.  They are  offering  hybrids and electrics in their popular lines .    General Motors  builds a mild hybrid, however the MPG doesn’t come close to Ford and Toyota.   This year Ford is trying to cover all the bases….  The company went so far as to build a  car that looks like a Prius, the  C-MAX .

Overall MPG in a base Prius is 48, in the MKZ Hybrid the MPG it’s 45, that’s higher than the Toyota Camry.

The MKZ represents a new direction for Lincoln. What do you think?