It WAS a mans world when it came to sex on commercial television. featuring women in bras, sexy sheer lingerie and bikinis selling everything from cigars, cars, mattresses  to burgers.

Women had to use their  imagination. Sexy, as a man in a suit taking his wife to dinner or the man in the shower,   But that was so 2009. 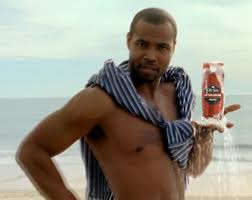 In February 2010,  Old Spice  launched commercial campaign Titled ” The Man Your Man Could Smell like “on You Tube  and Isaiah Mustafa blew up. (He was a hit!)

Suddenly Man Candy was everywhere, on TV, selling everything from Drain Openers to Vacuum Cleaners.

Wait Until Mom See’s This!

One day, I saw Anderson Davis (alisa Kraft‘s Zesty Man) in a television commercial. he was making something in the skillet  suddenly there was a flame and that flame burned his shirt off.   (Huh!)   I forgot what he was selling….apparently I’m in the minority.

Kraft taking a page from Old Spice, kicked it up a notch. 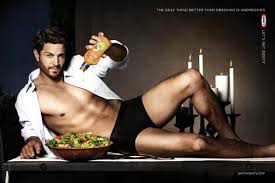 However, this print campaign(Let’s Get Zesty) pushed some Moms over the edge.

One Million Moms an organization founded by the American Family Association headquartered in Tupelo,Mississippi.   Finds the Ad campaign offencive.   “Kraft has gone too far and will push away loyal, conservative customers with this new ad campaign,” One Million Moms said on its website “Christians will not be able to buy Kraft dressings or any of their products until they clean up their advertising.”

The group, whose goal is to “stop the exploitation of our children,” urged supporters to email Kraft to express their displeasure and urge the company to immediately discontinue the campaign.

A few years ago the group asked Christians to boycott JCPenney’s because of their use of Ellen DeGeneres as a spokesperson.   The group and the parent group (American Family Association) has boycotted many companies From Geico to Target

Carl’s Jr is known as Hardee’s in Mississippi.   One Million Moms has gone after the chain because of its ads .  They’ve called  Hardee’s Sleazy and  an affront to all decent men, women and children!” It’s a load of cow pies.     They have gone after Hardee’s/Carl’s Jr for this ad

where a scorpion removes the top of this model.  The Mom’s are Busy!