I am not an automotive journalist .  Automobile manufactures do not invite me to media events to test drive their products.

I have  never test driven  an electric car because of their very limited range.  I felt they weren’t practical for most people.   The highly regarded Nissan Leaf and the Ford Focus electrics have a range of less than 100 miles.      Most of these cars are designed for California  the state  mandates that one in seven of the new cars sold in the state be an electric or other zero-emission vehicle.

Most Automakers use an existing platforms for electric cars  usually placing the battery or batteries in the trunk.

Tesla Motors  based in Palo Alto has been around for 10 years. Tesla makes lithium-ion battery packs and components for Toyota, Daimler’s and  other automakers   The Company’s first vehicle a limited production  Tesla Roadster

went on sale in 2008 with a base price  of  $128,000   Lotus provided the bodies for the Roadsters.  The car was a critical hit with the automotive press.  The cars range and power was unheard of 240 miles on a single charge.  Its zero to sixty time of 4.0 seconds was faster than most  V8’s.         Production  of the Lotus based Roadster ended in 2011.   Tesla’s grand plan was for small fleet of electrical vehicles.

The Tesla S was designed from the ground up  as an electric car .   The vehicle  is manufactured at the former GM/ Nummi Plant in Fremont, California across the bay from its Corporate Headquarters in Palo Alto.

There is nothing like the Tesla on the road today!   Unlike the other electric cars on the road today the Tesla platform isn’t shared with a conventional gas engine.   The very large battery is underneath the car as is the engine. 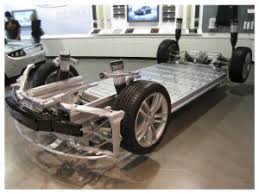 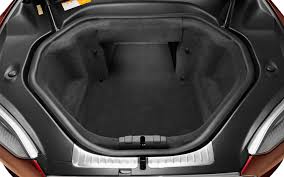 in the rear of this five passenger car  is extra storage  space  or a couple of rearward facing seats. 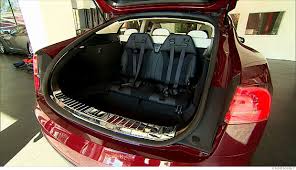 The  car  has been well received by the press .  Including the influential Consumer Reports Magazine  which gave the S  a score of 99 out of  100.     In the July issue , they say the car is brimming with innovation,delivers world-class performance,and is interwoven thorough out with impressive attention to detail.  It’s what Marty McFly might have brought back in place of his DeLorean in “Back to the Future”

I cant remember the last time Consumer Reports gushed over a car. Lost in the gushing is a recommendation from the magazine.  It may be a year or two before CR recommends the vehicle.

Tesla doesn’t have brick and  mortar showrooms cars are purchased online http://www.teslamotors.com/.    This policy may be problematic for Tesla as Texas, Virginia and now North Carolina wants Tesla sell cars the traditional way.

Dealers say laws passed over the decades to prevent car makers from selling directly to consumers are justified because without them auto makers could use their economic clout to sell vehicles for less than their independent franchisees. Dealers say Tesla’s direct sales violate those laws. These franchise laws have insulated car dealers from much of the e-commerce revolution that has hammered other sectors from books to electronics.   http://online.wsj.com/article/SB10001424127887324049504578541902814606098.html

Note : Tesla has recalled  models with the rearward facing seats to fix a rear-seat latch that it fears could fail in a crash.

Back story:  After having dinner in midtown, my daughter spotted a Tesla off L Street.   The Tesla belong to a friend of a friend who I met for lunch.    The owner was happy to give me a tour of his car. (He’s used to he questions)  He told about his trips to San Francisco and the Wine Country and how Tesla sends electronic fixes and improvements to the car.   Stories about charging stations and free stations coming for Tesla owners.    Then he said something that instantly made him my new BFF….  Would you like to drive?    I tried to play it cool-with my heart beating out of my chest.     I had difficultly controlling my voice when I said Sure.

My new BBF has a sense of humor.   I could figure out how to open he car….the door handles are flush with the car.   ..”Just touch it with your finger.   No keys are needed with the Tesla….  Once your in you buckle up  tap the brake and the huge 17 inch screen comes to life. This huge display controls everything in the car and its always on….      It was simply weird not to hear of feel a vibration  from the engine.

The power delivery was immediate  and intense.   I discovered  this by accident at 16th and L and I nearly ran into the rear of a taxi.    Entering the freeway was fantastic I wanted to go on, to Reno, but the owner had a meeting and the battery range was 132.

As for room, the Big Man had no problems, the car was leg cramp free for this  6.4 fella.  My 6.2 friend said he was fine in the rear seat.

And while this wasn’t a full test drive, I was impressed with the Tesla,   Should I win the powerball or fall over a large bag of money I would go on faith and buy this car.  The model I drove was nearly 100k before fees.   It had the largest battery, other versions of the cars with smaller batteries (short range) begin at 70k  before the state and federal  tax credits.   Feds will give you a credit of $7500. and the state $2000.

Charging station can be found throughout Sacramento, Tesla is building  a network of charging stations.   Range has always been an issue with electric cars.  Tesla has addressed the range issue  if you live in Placerville and work in Stockton  or live in El Dorado Hills and work downtown the S will get you there and back with range to spare.

Last month CNN said Tesla  is outselling the Audi A8 ,BMW 7 Series and the Mercedes S Class and the car had made a profit for the company.

A special thanks to Jeff (my new BFF)  for allowing me to drive his technical wonder.