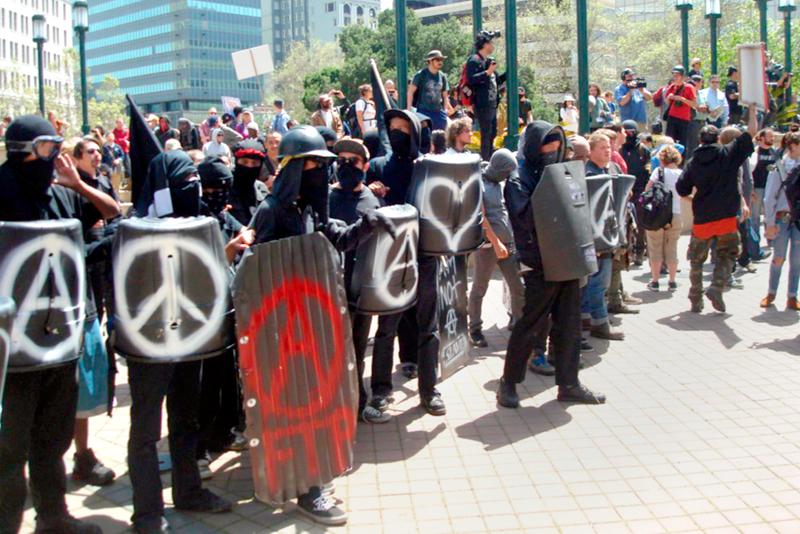 You can see them coming out of the Bart station ,they have a certain look (black pants , a dark blue or black back pack. ) and they seem to travel alone.    A couple of years ago during the Occupy Oakland they threw rocks at us for trying to put out a small fire on Broadway.  I don’t understand it , like why attack us?  They don’t give a fuck about anything or anyone ,they run into crowds of people doing nothing on purpose and next thing you know the Police are messing with us.   They break windows  then its fucking back on Bart  to Walnut Creek   ( Maya 22 North Berkeley)

A lot of people in disbelief  of the Zimmerman verdict  took to the streets of Downtown Oakland, saturday night.   While many in the crowd was angry, the march was orderly.   Suddenly people started running and breaking glass.

On Monday, At waiter working at the Flora Restaurant and bar was hit in the head with a hammer or another metal object.  (Reportedly attempting to prevent windows in the restaurant from being broken)  Garbage was lit on fire and fireworks were thrown at police officers, police said, while graffiti was scrawled across buildings — one said “REVOLT,” according to KTVU-TV — and some burned American flags. Windows were shattered at a Men’s Wearhouse, Comerica bank, and  Youth Radio, according to police and media reports. A KPIX-TV reporter said vandals broke into the CBS affiliate’s television truck.

Black bloc
Wikipedia, the free encyclopedia
A black bloc is a tactic for protests and marches, whereby individuals wear black clothing, scarves, ski masks, motorcycle helmets with padding or other face-concealing items and often carry some sort of shields and truncheons.[1][2] The clothing is used to avoid being identified, and to, theoretically, appear as one large mass, promoting solidarity.

The tactic was developed in the 1980s by autonomists protesting squatter evictions, nuclear power and restrictions on abortion among other things.[1] Black blocs gained broader media attention outside Europe during the 1999 anti-WTO demonstrations, when a black bloc damaged property of GAP, Starbucks, Old Navy, and other multinational retail locations in downtown Seattle.[

“The Black Bloc” is sometimes incorrectly reported as being the name of a specific anarchist group. It is, rather, a tactic that may be adopted by groups of various motivations and methods.

Through the years, I have participated in many protests.  Being from the Bay Area, I’d often wonder why Oakland, why the East Bay?

There are far more  colleges and Universities  across the bay  in San Francisco or down the peninsula at Stanford.  During the Vietnam war there were protests at all the Colleges and Universities.   But none was as intense as Berkeley( Telegraph avenue near the UC campus was the epicenter)  Many business left plywood on their windows for years…. with nothing to smash on Telegraph, some students as marched Downtown Berkeley to  Shattuck Avenue.  I can clearly remember a woman standing in front of JC Penney’s, admiring a dress or something and someone hurled a brick through the plate glass window.   It didn’t phase her a bit… She just walked away.  The kid who threw the brick was attacked by some of the students.

There have always been anarchist. Back in the day, you were on the same side, some chose an more aggressive course of action.

The motives of the black bloc anarchist are unclear.  The black bloc movement is more sophisticated then the protests of the 70’s and 80’s.  Believers are only a tweet away.  In addition there is a network of web sites that send messages, locations to cell phones.

In the Bay Area, Bart seems to be primary mode of transportation and  because of this many believe the most of the anarchist are from the suburbs .     Two years ago the transit system blocked cell phone traffic at its San Francisco Stations  to thwart planned protests, while the  action was illegal, it was effective.   Today, if there is trouble above, they close the stations below. 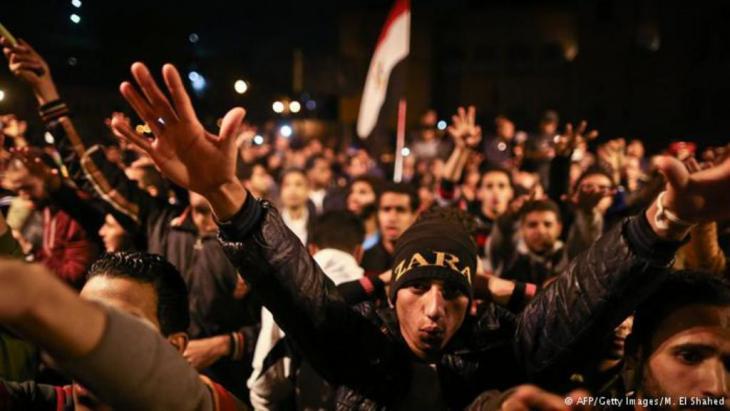 A masked Egyptian protester part of the Black Bloc, flashes the victory sign during clashes with riot police, background, near Tahrir Square, Cairo, Egypt, Monday, Jan. 28, 2013. An unpredictable new element has entered Egypt s wave of political unrest, a mysterious group of black-masked young men calling themselves the Black Bloc. They present themselves as the defenders of protesters against the rule of President Mohammed Morsi, but Islamists have used them to depict the opposition as a violent force wrecking the nation.

It seems those people are there to protest have regained  control.Oakland in the last couple of  days,   The anarchist are being managed and told to leave.

Saturday a national protest is being held in more than 100 communities.  There will be closures, people will be inconvenienced this weekend.    In addition to the good people, there will be bad people.  Antagonist, there will be a person’s who may want to cause public damage, they will be managed by the crowd.    Crossing Fingers.