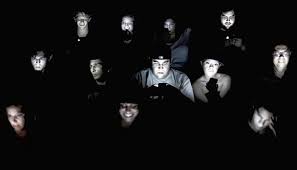 Look at this picture, are you in here.  All of these glowing people are interacting, but not with each other.

It’s a phenomenon, people who can’t seem to function without their cell phones.   You’ve seen them in restaurants, clubs, or simply walking down the street looking directly at the phones  and to avoid head on collisions, the world has to twist and leap out of their way.

I would like to think I’m and interesting person, very conversational, funny, but after a few dates   where I was competing with a phone for my dates attention,   (It’s really an ego booster when your talking to someone  scanning their phones)  So on one of these dates.  I walked out and I never looked back.  My date was angry and surprised and  I remember saying, your already in a relationship, with your I-phone.

Your phone can’t put out a fire, perform the Heimlich maneuver or help you start someone car.

When we sit down for dinner, I will often take out my phone and turn it off, hoping  my date  will do the same.     If that doesn’t work and the phone rings, and they are on the second call I will say “maybe this is a bad time”…  and perhaps we can meet another time   (this usually works)    HOWEVER, if we are out at a concert or movie and you are talking or texting game over.    My feeling is, if you are  waiting for an important life or death call. then you shouldn’t be out on date!

When you out on a date.  At the minimum your date deserves your full attention. Your life wont come to an  end because you  missed a call.

It beyond rude, looking at your phone during a date, (why not bring a book or finish that crossword puzzle) it’s a signal to your date that they are not  interesting or important.

A few weeks ago, I was at a bar with a friend.  This friend is somewhat shy, its difficult to initiate  a conversation.     We separated and after about 10 minutes , I saw him at the corner of the bar looking at his bloody phone  his face was highlighted by the glow of his cell phone ,he was texting.  I walked through the crowd and asked for his phone.  Before the night ended, he was chatting it up at the bar.    At the end of the evening, he had two numbers.

Through the night.  A lot of the people who entered the bar alone only interacted with their phones, rarely looking up and around.  The  bar was filled with people talking and  laughing  with music blaring and these people were noticeable from the glow of their phone.

One man was looking at woman at the bar a few seats away from my friend.   She looking at something on her phone.   At one point in the evening he walked towards her ( now mind you, I know the game-pretending to talk to someone so they would go away)   and stopped short when her phone rang.

In the same bar, I noticed another man just laughing and texting on his phone.    I overheard one woman standing  near me who was earlier texting,  telling someone  how dead the place was and she was going  home  to watch TV.

If you are interacting with your phone you’re not available or approachable.    How many times has a complete stranger walked up to you while you were having a  conversation and told you he or she thought you where attractive?

So if your telling (texting) your friend who tired a place is and there are no interesting people there.   It could it be you?  Try turning your phone off.  Look around there is a world out there outside of  your 4 inch HD screen, join us.  And remember to physically laugh out loud  not LOL.

One thought on “Sexual Saturdays: Your cell phone just may be ruining your love life”