We’re the phone company, we don’t care we don’t have to!

There was a time where there were three automobile companies in the North America. GM, Ford and Chrysler.  Yes there were smaller car companies and imports, for the most part if you bought a car in America it was from the big three.

Toyota earnestly entered the American market in the mid sixties with small Japanese cars at a time when bigger was better,

In 1966, Toyota introduced the Corolla.  It didn’t burn up the market.

The Japanese owns the american auto market.  Last month, the Toyota Camry leaped over the Chevrolet Silverado the perennial runner up to the Ford F-150 pickup Truck.

In August,  the best selling cars in the US

While tenth place is an excellent showing, it makes Toyota execs nervous.   10 is not a good showing for Corolla.    The market place is rapidly changing .   The Koreans have chipped away at Japanese dominance.   Volkswagen is producing cars (Jetta and Passat) for the american market.

‘While the Corolla isn’t the entry level car for Toyota, it’s has an appeal that no other car has.   Its the car that an 18 year old, his parents and grandparents might purchase.

For more than two decades the Japanese sold bland boring cars in mass.  Then Hyundai changes the script, followed by the American car makers.   Bland is out style is in.

It is rumored Toyota is heavenly discounting the Camry which looked dated at its introduction last year.  Look for a refresh by late next year.

The styling is edgier the interior looks more Avalon then Camry.

It has more transmission choices and engine choices than ever before.

The very clever marketing campaign  is directed at the twenty somethings and baby boomers.

Early Reviews suggest there is nothing groundbreaking about the Corolla.   The exterior styling is a bit Avalon with a hint of Lexus in the front and a bit of Camry in the rear.

Toyota took no chances with the Corolla,   They took a risk with Avalon, and the results is mixed.  Long criticized for having soft grandpa like suspensions, Toyota may have gone to far in the other direction as some reviews  say the ride in the Avalon is too harsh.

No such mistake with the Corolla 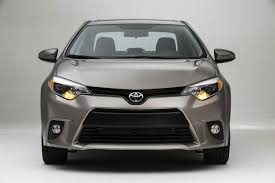 Toyota will sell a gillion of these

There is new competition in coming from all directions, America,and Europe have introduced newer models.   Next year BMW ,Audi and Mercedes Benz will introduce newer smaller front will drive models.

Big Man Rides will review the new Corolla next month.