High rise residential towers have reshaped the skyline of Austin, Seattle, and San Francisco.    Rising next to the Bay Bridge is the second tallest condo on the west coast is the  50 story One Rincon Hill II.

The tallest residential tower west of Chicago is the 683 foot The Austonian in Austin Texas. 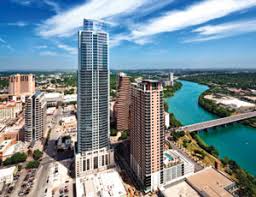 Before the building boom went bust, sacramentians where all the buzz about the 53 story Saca Towers planned for Capitol Mall.   Saca Tower was one of Condominiums planned or built between 2005-2007.  Most struggled to find buyers.  Some projects went bankrupt, others became rentals.

Not many years ago there were pile drivers strengthening the ground. The project went bust and the current land owners CalPers say one day they will build a smaller residential office retail center on the site.

Today this prime location awaits funding and a visionary.

The economic collapse was devastating to real estate market nationally.  To generate revenue, many of the nations condo’s  became rentals. The Condo Market recovered  quickly in Honolulu, New York, San Francisco, Austin and other cities.

After many years of being dormant, Tapestri Square in midtown has found buyers.

The L Street Lofts is nearly sold out.

Capitol Park at 15th and L (above the Residence Inn) is currently the tallest Condo project in the city.

There is a market in Sacramento.  Before the project failed one of the 52 story Saca Towers was sold out.    Sacramento is the capitol of the 12th largest economy in the world.  Only Washington has more associations and lobbyist,and politicians who are  currently scattered throughout the city.

The condo market in many cities haven’t recovered from the economic crises.  Lenders are very cautious,Sacramento condo  is an unknown market. Sacramento, a rising city?  Not yet.  Some believe the condo market will fully rebound in 3 to 4 years.

One thought on “Cities Rising: Sacramento?”