“On the advice of my counsel, I respectfully assert my right to remain silent under the United States and New Jersey constitutions”

On Thursday, David Wildstein, the former Port Authority official at the center of New Jersey Gov. Chris Christie’s refused to testify about the controversy before the New Jersey Assembly’s Transportation, Public Works and Independent Authorities Committee, which has been probing the  four day closure in September of the City of Fort Lee’s access lanes to the George Washington Bridge.

Who is David Wildstein?

Wildstein met Christie when they were classmates in Livingston High School in the late 1970s. He served as Livington’s mayor from 1987 to 1988, and then left elected office to join the family floor mat manufacturing business. In 2000, Wildstein secretly founded the New Jersey political news site PoliticsNJ.com — now PolitickerNJ.com. He used the pen name Wally Edge, which he took from the former New Jersey governor and U.S. senator whose support led to the creation of the Port Authority in 1921. Wildstein’s identity was revealed in 2010 when he was hired as director of interstate capital projects at the Port Authority, a $150,020-a-year position that had no job description. Wildstein, 52, resigned in December amid the GWB (Source: NJ.com)

Resume? I don’t need a stinkin Resume! Got a problem? Take it up with Governor

The New Jersey Star-Ledger reported that no resume for Wildstein was turned over by the Port Authority in response to a Freedom of Information request filed by the newspaper for state employees in Wildstein’s salary range. “A man with no resume, hired to do a six-figure job that has no job description,

The Record of Woodland Park reported that David Wildstein, the Port Authority’s second-most powerful appointee from New Jersey who resigned in December. Bought domains that use the names of Pat Foye, the authority’s top executive; Barbara Buono, a Democratic state senator who lost to Gov. Chris Christie in this year’s gubernatorial race; and her running mate, labor leader Milly Silva.

It’s not clear why David Wildstein made the purchases. This was done independently of the campaign and without any authorization,” Mike DuHaime said. “The governor had no knowledge either.”

Foye, Buono and Silva also were unaware Wildstein reserved their Internet identities. Some were stunned to hear about the purchases.

Internet records show Wildstein has purchased at least 48 domains and has renewed some of them annually. Domain names typically cost less than $10 a year.

None of the domain names are redirected to sinister websites and most take users to the website of Wildstein’s favorite baseball team, the Yankees. 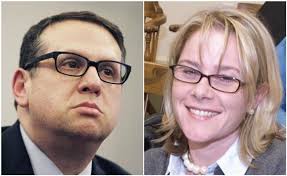 That was David Wildstein’s response to an e-mail sent by the former  Deputy Chief of Staff Bridget Anne Kelly on August 13 ,2013 when she wrote  “Time for some traffic problems in Fort Lee.”.

Kelly was fired by Governor Christie on Thursday.  Christie said Thursday that Deputy Chief of Staff Bridget Anne Kelly had been fired “because she lied to me.”

Speculation has mounted that Wildstein’s order was a rebuke to the Mayor of Fort Lee, New Jersey, Mark Sokolich , after Sokolich refused to endorse Christie during his recent re-election campaign.

Friend to the END?

Mean while, it was unclear whether Wildstein would face a formal charge and whether the committee’s vote would have any practical implications for him.    The committee’s unanimous vote to hold Wildstein in contempt opened a legal debate over whether the state statute can be enforced. Wildstein’s attorney said his client’s Fifth Amendment rights trumped any state laws.

Closing the George Washington violated Federal laws.  If the Federal Government  does its own investigation it   raises the stakes for all of the players.

Governor Christie maintains he new nothing…..    “Time will Tell”

Is The Governor a Bully?