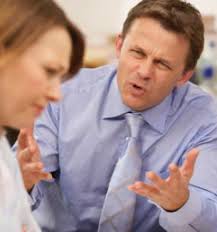 Cheaters show aggression and lack of empathy during a breakup.

Been wondering why the man who cheated on you is also furious at you? Where does he get off blaming you when he was the one who cheated? When my ex told me he was leaving I kept asking him why he was so angry with me, what did I do that was so terrible? He insisted that it wasn’t about me.

“Why do you always think everything is about you?” he’d snap at me. I guess he meant it was about her since he had fallen in love with someone else. Then why was he so angry at me? Why did he blame me for the demise of the relationship, why did he seem to feel entitled to leave me for someone else, why the constant rage?

According to Catherine B. Silver, in an essay in Cut Loose; edited by Nan Bauer-Maglin, “Dumping someone is certainly an act of fear, aggressiveness and symbolic violence. When an individual dumps a partner he expresses narcissistic rage comparable to a child’s temper tantrum.” It is that act of aggression that makes men who dump a wife or girlfriend for someone else different from a man who cheats but remains in the relationship.

Why are some men so cruel?

I couldn’t understand why my ex never expressed remorse for what he’d done to me after leaving me for another woman. He had remorse over what he had done to our daughter but none for the pain he had caused me. He’d always been extremely concerned about me while we were married, worried about my health, mental and physical. He’d always apologized every time he blew up at me. I was stunned at his coldness.

An Inability to Empathize:

He did say to me on various occasions that he felt guilty, but he never apologized or showed any empathy for my suffering. “Infidelity” is harder on women, who are more vulnerable to feelings while men are a law unto themselves,” explains psychoanalyst Simone Sternberg. “Men don’t allow themselves to empathize with women’s suffering. It’s too threatening. Also underneath a man’s supposed indifference or even hostility is self-hate which they project onto the wife. They can’t afford to empathize or they’ll have to experience the full force of that emotion.

Unfaithful husbands-even husbands who have always been loving can be inexplicably brutal once the fall for someone else. He’s already found a new partner, and doesn’t feel the loss of the marriage. You, on the other hand, are shattered, terrified of the future and collapsing on friends and relatives shoulders.

His happiness is the unkindest cut of all. He’s already detached from you, or is in the process of detaching, which makes him excruciatingly insensitive. For middle aged women this scenario is even more painful, since the departing husband has found love, usually with a younger woman, and we know that we’re unlikely to do the same. Our years of prime sexual attractiveness are over and available men will be few and far between at our age.

I was furious that my husband waited so long to leave when he insisted he’d been “unhappy since day one.” I wondered why he hadn’t left on day two when I was young enough to find another partner? He admitted he never could have left unless he’d found another woman, which was honest at least.

Sheree, a tall impeccably dressed brunette girlfriend, fifty-two, was treated despicably by her unfaithful ex despite her description of her marriage as “fun, more good times than bad. We both had a sense of adventure, we were good partners, a good team, worked together well as parents, coached Little League together.”

But five or six years ago he started to keep secrets, became nasty and distancing. This didn’t prepare her for what he said when he left for another woman. She relates with bewilderment and hurt what he said to her, “he was counting the days until the kids graduated from high school so he could leave. He told me he hated me. He’d had a plan to leave for twelve years before he left.” Her husband, who had always been a good father, refuses to see his children now because they won’t accept his girlfriend.

When Sheree was in my divorce support group a few years ago she still hadn’t totally absorbed his brutality, she still called him looking for approval. I’m happy to report that she no longer wants his approval, just the money he owes her. Emotionally she has finally “moved on.”