The net is the easiest place in the world to assume an identity. Relative newcomers to the net are shocked.  Some long termed users are disillusioned and bitter.

Super long term users have learned (when it comes to personal relationships) to navigate the choppy waters and to have a sense of humor along the way…..

Meet Richard 46, he has been single for 7 years.  He no longer believes he will meet his life partner online and says  he is addicted to online sites. “ I fish for sport now, most times its a catch and release, every now and them I will meet someone interesting”

One afternoon I was trolling online and came across a handsome man”s picture and I said hi.

After introductions the man told me how big his dick was.   Now I’m not a size king.   I just want  it to work and you get extra points if you have other skills. He went on to tell me, it was as thick as a coke can.

BUT HE KEPT GOING ON….ABOUT HIS ANACONDA.

Well shit, now I’m curious…. and concerned…..  This is big, will I choke?   And what will happen if cant satisfy him.  What if I pass out will someone find me in some alley?    My imagination was running wild.  Coke can huh?

When the boy slash man, pulled it out.   I wanted to scream at the TOP of my lungs FAKE!   If the man, hadn’t gonna on about his dick  I  would have still come over and we might have had a good time…   But now I’m pissed, it was like going to the Amusement park and anticipating the terror of a Giant Roller Coaster and being directed to a  Kiddie Ride.  I was so pissed I wanted him to  pay for my gas and pay for the soap I used to shower!

But you know someone, somewhere at sometime said your serious right?

Where is it?   I mean is it like a  lens you attach to a camera?    I could have pointed and laughed at his ass but I didn’t.  I made some vague excuse and left.

But I sure laughed when I got in my car.

Instead of an Anaconda, his meat was from Vienna. 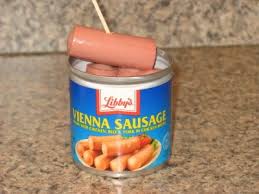