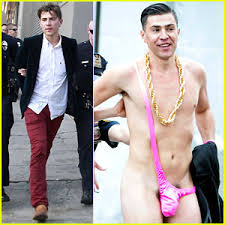 25 year old Vitalii Sediuk loves American celebrities.  He’s been slapped by Will Smith.   His face has been under America Ferrera’s dress and in the crotches of  Bradley Cooper AND Leonardo DiCaprio.   Encounters with other A- listers has made him celebrity enemy  number one.

Vitalii Sediuk was a reporter for the Ukrainian television channel 1+1 .   He was fired from his reporter job after he jumped under actress America Ferrera’s dress on May 17th at the Cannes Film Festival.   Even though he is a known prankster, the  TV network says they were not  involved in his stunts.

Sediuk has lived in Los Angeles area  since 2012.where  he filed occasional stories for 1+1.  He also works as an aspiring writer / director / producer

Timeline of the Notorious Vatalii

While Madonna can live with wire hangers.  Everybody’s knows she hates hydrangeas.   Vatalii handed Madonna a bouquet of hydrangeas at the Venice Film Festival,

He kissed Will Smith at the premier of Men in Black III in Moscow.  Smith not feeling particularly romantic slapped the crap out him and asked ” What the HELL is your problem?

He eluded security to get a second-row seat inside the Staples Center at the 2013 Grammy Awards, despite having no credentials. Sediuk  jumped onto the stage when Jennifer Lopez announced Adele as the winner. “I love you, Adele,” he is heard saying as the singer approached. He was arrested offstage and later prosecuted on two misdemeanor charges.

Sediuk attempted to enter the 85th Academy Awards wearing drag.  But was turned back by security .

I think there is something on your crotch…..My Face!!!!!!

Bradley Cooper at the 20th Screen Actors Guild Awards at the Shrine Auditorium in Los Angeles.

Sediuk gave it his all and bared it for the fashionistas  during  New York Fashion Week .  Where he was arrested for trespassing.

As she posed for pictures the premier of How to Train Your Dragon 2 at the Cannes Film Festival Sediuk crawled under her gown.

While his wife Angelina Jolie ,star of Maleficent was being interviewed on one side of El Capitan Theater on Hollywood Boulevard Wednesday.  Brad Pitt was on the other side  signing autographs. Sediuk allegedly jumped the rope and hit actor in his face, according to Los Angeles Police Sgt. Leonard Calderon.   Pitt, who looked as he got a couple of punches in, continued unfazed on the carpet to giving  interviews.

Sediuk, 25, previously told  “The Hollywood Reporter”  that he relied on 1+1 — a celebrity-oriented network that airs the  Ukrainian version of The Voice  to cover the legal costs incurred during his last brush with the law, following his arrest for storming the stage at the 2013 Grammys. That incident resulted in three years of probation and a lifetime ban from the L.A Live complex.

This time around, Sediuk — who is still being held by the L.A. County Sheriff’s Department on suspicion of battery, pending $20,000 bond — will be left entirely to his own devices.

His first appearance before a Los Angeles judge is scheduled for Today, but he has already been slapped with an emergency protective order barring him from approaching Pitt. The restraining order expires on Monday, but is likely to be extended.