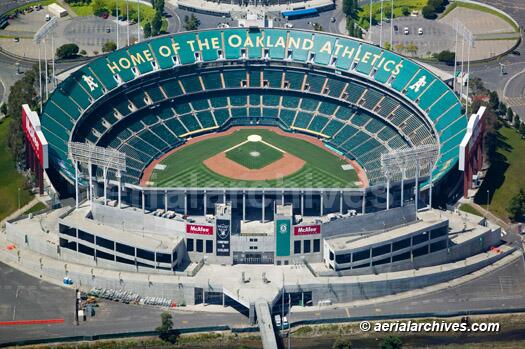 Fans of A’s and Raiders no fan of stadium saga

Mark Page loves the A’s and Raiders, and he wants them to stay in Oakland. But when his favorite teams threaten to leave town, or, worse, try to force out the other, Page fears that fans like him are watching a game they can only lose.

“I’m really worried about both teams,” the San Leandro contractor said as he watched Wednesday’s A’s game with his son at Ricky’s Sports Theatre and Grill. “If push came to shove and we’d have to choose one, I don’t know what I’d do. I’d die.”

This summer has been the best and worst of times for East Bay sports fans.

On the diamond, they are enjoying a banner season. But the seemingly never-ending stadium saga for both the A’s and Raiders has intensified into a full-fledged soap opera.

In the past month, Raiders owner Mark Davis has said publicly that he’d like the Raiders to be the only sports team playing at a redeveloped Coliseum complex. And, A’s owner Lew Wolff has threatened Oakland officials in writing that he has authorization to move the team if they don’t ratify a lease extension.

Although the City Council is expected to sign off on the lease at a special meeting on Wednesday, the A’s could still be forced from Oakland if the Raiders get their way and demolish the Coliseum in the next two years to pave the way for a new football stadium.

“I can’t remember the last time you had baseball and football teams in the same building both making threats and battling with each other,” said Neil deMause, a critic of publicly funded stadiums and the co-author of the book “Neil deMause.”

The sense that both teams are in limbo and possibly working at cross-purposes weighed heavily on fans at Ricky’s.

“It’s just a strange, weird feeling all around,” said Page’s son, Mark Page Jr. “Even more so because things never get done, and there’s no solution in sight.”

The A’s and Raiders are the last professional baseball and football clubs to share an outdoor stadium. Other cities such as Seattle, Pittsburgh and Cincinnati had an easy and expensive solution to satisfying their teams — they demolished their multiuse stadiums and built separate facilities for baseball and football mostly on the public dime.

But Oakland and Alameda County taxpayers can’t afford to do that. They still owe a combined $140 million from renovations to O.co Coliseum that brought back the Raiders nearly 20 years ago.

The best hope for building new stadiums appears to be combining them with a larger entertainment complex whose shops and restaurants could offset the cost of stadium construction. But neither team appears to want the other as part of such a development, and fans fear that if the A’s had to leave Oakland to make way for a Raiders stadium, they probably would never return.

“To know they were here and they left because of a disagreement with my other favorite team, that would make it hard to take,” Gabriele Parra, of Oakland, said while watching Wednesday’s baseball game.

Morris Kahane, of Oakland, said he expected that the city could only keep one team and that it would be better off with the A’s since they play more games and can bring in more revenue.

“If the Raiders go to L.A., I’ll miss the tailgates, but we’ll still be able to watch the games,” he said.

At this point the Raiders are the most immediate threat to leave the Bay Area because the economics of professional football allows its teams to be profitable in both large and small markets, said Victor Matheson, an economics professor at the College of the Holy Cross.

“The Raiders could pick up and move to Los Angeles or San Antonio rather quickly,” he said. “The A’s are not moving to Portland or Charlotte or Montreal. Those are not great places to play baseball.”

For now, fans like the Pages are left to enjoy the baseball season and hope for the best long-term.

“I told my son here that if we win Powerball,” Page said, “we’re building a stadium.”

The Oakland-Alameda(County) Coliseum Complex opened in September 1966. It is the only multi-purpose stadium left to serve as a full-time home to both a Major League Baseball Team (Oakland Athletics) and National Football Team (Oakland Raiders).

The Raiders played their first game at the stadium on September 18,1966. In 1968, the Kansas City Athletics became the Oakland Athletics and began play at the new stadium. The Athletics’ first game was played on April 17, 1968. The stadium complex cost $25.5 million to build and rests on 120 acres (49 ha) of land.  The NBA Golden State Warriors plays in the adjacent arena.

3 thoughts on “Oakland Raiders to the Oakland Athletics….GET OUT!”