They were talking loudly during the opening  credits of Godzilla, Friday night.   Witnesses said the talking noise was replaced with sounds that indicated the couple was engaging in oral sex. (a mind wanders)

A few theater goers notified the manager who told them to stop that, its Godzilla! (not really) .

Despite the warning Michele and David continued.  The no nonsense manager called Casper Police around 1130.(Probably as Godzilla was saving mankind)

Casper’s finest said David and Michelle were drunk at the time of their arrest.  Michelle was particularly stubborn as she refused to hand over her purse.  At the jail, they found out why, inside was a coveted bottle of  “Fireball Whiskey”. 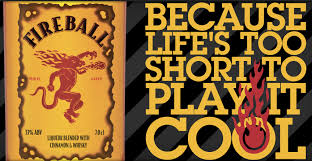 Both people were charged with public intoxication and indecent exposure. Michele get an additional charges of interference and having an open container.

The following is a Public Service Announcement!

Should you visit the Fox Theater at 150 West Second Street, in Beautiful Casper Wyoming

Sex is NOT permitted anywhere in the Theater