A friend who drives an German car concedes the Dodge would win in a straight line,but say’s Europeans cars are superior in the curves.  How many drag races take places in curvy places.

Imagine, being at the light  in your Dodge, and a  7 series or S class pulls up next to you…..   Imagine the look.

Who needs 707 horses?  Any adult(ADULT) with a bit of bad ass left in them.
(Someone who would enjoy humiliating some kid with his friends in an expensive car-especially a mom with a sign that says baby on board)

Note: The top speed on the Charger is 2mph(204) higher than its smaller and lighter brother the Challenger(202), due to better aerodynamics on the larger car.

First they launch the headline-stealing  Challenger Hellcat from the bowels of, well, Detroit. Why not try a 707-horsepower version of that favored four-door of NASCAR families, the Charger?

Unlike that Viper-powered pickup, whose no-stability volatility seemed designed by the Grim Reaper himself, the Charger and Challenger ’Cats are something special precisely because they’re not truly evil. Instead, the Charger Hellcat  is like a devil on one shoulder, angel on the other. The devil whispers, “Yo, pal, there isn’t a cop for three counties. Let’s try for that 11-second quarter mile, the 204-mph top speed, or fry some rubber for lunch.” The angel rolls his eyes and says, “Please. We’re picking up the kids. Let’s relax, enjoy this glorious Wi-Fi connection, and dial the new drive modes to Full Barca lounger. Besides, you got a ticket last week.”

Those dueling spirits were highlighted on a burbling cruise from Washington, D.C., to Summit Point Raceway in West Virginia. There, the Dodge raged in shockingly easy-peasy fashion for a 4,575-pound American muscle sedan.

In fact, the Hellcat proved nearly as civilized as its less bodacious Charger bros. Lineup-wide 2015 upgrades include a snazzier interior and an eight-speed automatic with a gated electronic console lever. A shrink-wrapped, scallop-doored body better disguises its bulky proportions. The tasteful front end includes an air-slurping mesh grille, Naca hood intake and dual heat extractors, all to feed and cool the beast: the supercharged, 6.2-liter V-8 with 707 horses and 650 lb-ft.

The rest is carry-over from the ponycar Hellcat, including Brembo brakes with front 15.4-inch rotors and six-piston calipers; three-way adjustable Bilstein shocks; and robust gauges, steering wheel, and seats.

Compared with its Challenger cousin, the Charger is 160 pounds heavier and there’s no manual transmission choice. But the ride is more compliant, with spring rates softened by 27 percent front, 10 percent rear. And it’s quieter inside, thanks to added underhood insulation and more restrictive middle exhaust resonators.

The factory-measured 3.7-second scamper to 60 mph and an NHRA-certified 11-flat quarter mile are both 0.2 second behind the two-door. The insane 204 mph top speed, however, is 5 mph beyond the Challenger’s. 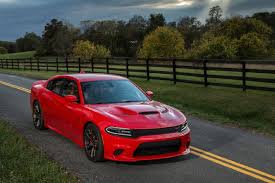 Despite the roomier back seat and comfier ride, the sedan feels just as madcap. As in the Challenger, owners can electronically limit horsepower to 500 to conserve premium unleaded, and soothe steering, transmission, throttle, and stability programs via the touchscreen or the secondary black key fob.

But the red key unleashes the full satanic majesty, making the Hellcat what Dodge bills as the world’s quickest, most powerful production sedan. Not a $100,000 AMG Mercedes. Not a $300,000 Bentley. But a Dodge, priced at $64,990.

On Summit Point’s road course, the Charger is surprisingly entertaining. The body leans, but there’s no wallow. Steering is largely mute, but 20-inch Pirelli P Zero tires offer ample aural warning before they give up the ghost. And that sound: a smoky stock-car braaap that owners will replay like their favorite song.

Despite its assaultive power, this Charger is too softly sprung and porky to dominate a track. The Camaro Z/28 would use its superior everything—aside from brute force—to dispatch the Dodge.

Yet as a daily driving sociopath, either Hellcat is arguably more appropriate than the track-centric Z/28. Two doors or four, the Hellcat will whup the Z/28 in most any street contest, is more comfortable and deluxe, and costs $10,000 to $14,000 less. 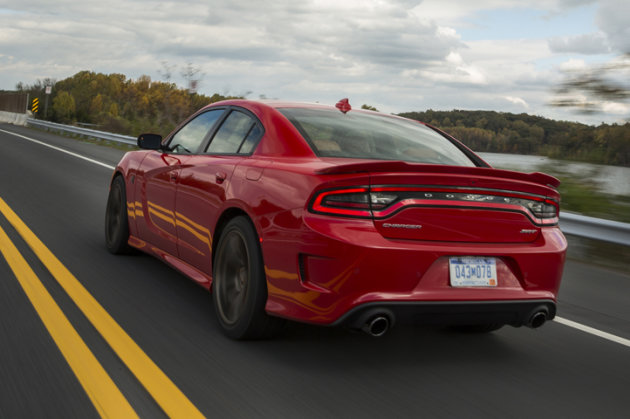