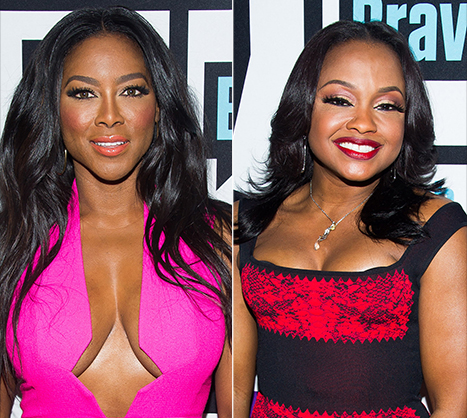 YES!!! We watch the housewives for the Drama.  But this season there was a lot of circling the drain. We had long grown tired of the Kenya-Phaedra Drama that has gone on for more than 2 seasons.  The Porsha-Kenya feud gone on with no resolution. We tune in for the drama but old drama was simply old.

The episode began at the farm resort.  Everyone was in good spirits, on the bus there was a twerk off between Porsha and Demetria (yes Demetria!-will she be around next year?doubt it!) they deemed it a tie. Demetria has style and talent, but Porsha had the assets.  Everyone was into it. No drama just laughter.  Dare I say it again, refreshing.  Everyone is cautiously aware of the good time.   This is the first time the ladies went on a trip and there was no fighting.

We see Nene getting fitted for Cinderella.  The costumes are elaborate, heavy and bulky. Unlike Hollywood there are no second takes on Broadway and the stress of the role is taking its toll on Nene. She gets emotional when she thinks how far she’s come (and she has, love her or hate her-she has come the furthest of all the housewives) and she want to get it get it right as she knows about the haters waiting to see her fail.    Gregg is taken by bussels on the costumes and is spanking it.  it was funny however his actions is lost of the director who doesn’t know quite what to say or do.  (I’m sure in his mind he is saying it must be one of those African American Rituals)

After everyone is settled into the hotel, Claudia has arranged a horseback ride to the top of a volcano.

When they returned from the Volcano Phaedra learns her tour guide has lost her husband a few years ago and was supporting five children on her own.  Phaedra is touched by this and gives the woman some money and through a translator tells  the woman that she doesn’t want her to give up, and that her story has blessed her.  Yes, I did say Phaedra!

Life without Nene and the Tawk!

Its day three, the ladies are still enjoying themselves AND there is not been on squabble.

This statement could have gone very wrong.

Claudia being a lil shady asks if anyone had spoken to Nene. Porsha could barely keeping from laughing as she tells them that Nene was glad to hear the trip was working out and if Nene was there, she would have fallen into line like the rest of them(Ok Porsha, you a Martin hang on to that dream)

In the confessional Kandi said, if Nene was there. There would have been two separate camps Nene,Porsha and Phaedra.

Claudia plans a pajama party.  Most of the ladies came dressed for the TV, Demetria didn’t get the memo.  Everyone was there except Kenya and Phaedra who decided this was the time to have the tawk.

While I don’t trust Kenya, but on this outing she seems sincere and it gets worse, I sense Phaedra wants this over.

Before the tawk, Phaedra contacts her spiritual adviser for advise.

Kenya, opens allowing Phaedra to say her piece. Kenya gets a very rare Pheadra Parks apology.  For making Kenya feel like she was out to get her.  She goes on to say, she stood by her husband .

Kenya was hurt by Phaedra calling her a whore, several times.  To be real, Kenya had it coming as she openly flirted with her husband.   You called me whore several times, Phaedra, I  haven’t called you a whore this year.

Kenya didn’t get the I believe you she wanted.  What she got was an emotional , she cant rewrite how she felt in the past, but she is promising to not look back and to wipe the slate clean.  Kenya says that’s good enough for her.  The two prayed together followed by another cant believe moment, a hug.

The two join the others at the pajama party.   A major weigh has been lifted.  Everyone applauds them for doing the work.

If you want nasty you have to go to Beverly,Hills that is by far one of the  Nastiest Reunion in a while.   Take off your glasses as this year its Kyle Richards who have gone under the knife and looks gaunt.   She joins Lisa and Brandi who had work done last year.

These last two episodes have been special, however next week we will be back in Atlanta.