I am a major fan of old Movie Theaters. They were buildings of fantasy, the architecture has the ability to transport you to another time.  One of my favorite theater in San Francisco is the Alhambra Theater on Polk Street. Build in  Opened in 1926 ,the ornate Moorish design takes you to Spain..   The theater was designed by Timothy Pfluegery who the designed the Castro Theater,the Senator Theater in Chico and the Paramount Theater in Oakland. 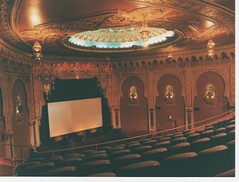 My first visit to the Century on Ethan, my son and I saw “Aladdin” in the big Dome, it was our first movie experience in Sacramento.   Many years before, the dome was split the domes in half. As a result patrons sit at an angle.

I discovered the Domes on a field trip in public school.  The movie was the musical “Oliver”  at the Century Dome in Pleasant Hill.  While I didn’t think much of the movie, I loved the building . A round theater, with a huge curved screen. A typical theater is a square box.   When I grew up I visited the other Century Domes in Bay Area.   Many of the domes had 70mm projectors ( the premier movie going experience at the time).

For many years the Dome was Century’s Logo

A San Francisco resident, I would drive to the Century Theaters in Oakland and San Jose . In the 80’s we drove to Hollywood to see the Premere of the ” The Jazz Singer” at the fantastic, Cinerama Dome in Hollywood.

With the exception of the Crest Downtown, there aren’t any theaters of fantasy in Sacramento.  No one would confuse the Century Domes with the movie Palaces of the day.  There are some here in Sacramento, who continue to morn the demolition of the Alhambra .

The Century domes in Sacramento aren’t old enough for landmark status. If they are all destroyed some of us will mourn their passing.  In Sacramento and in most of the country, most theaters are small square boxes, with sound often leaking from the adjoining theater.

Sacramento’s Dome represents is the end of an era.  Like Sacramento’s Alhambra, San Francisco’s Fox, the city believes they have outlived their usefulness, They are blocking progress. The landowner is lily to replace the building with another Ross, or Marshall’s   Sacramento’s Alhambra was razed for a Safeway.

I’m one of many Sacramentians  who hope the remaining structures aren’t destroyed, restored ,perhaps as an multi-entertainment facility.

One already has been demolished, and the remaining domed (and probably doomed) theaters at Sacramento’s Century Stadium 14 aren’t much to look at. Weather-beaten into a dull tan and dishwater gray, they resemble agricultural silos – especially when the State Fair’s running across the street.

But when first futuristic-looking Sacramento “Century” dome opened on Ethan Way in 1967 with a revival of “Gone With the Wind,” it represented the height of movie technology – a curved, 70-foot-wide screen, stereophonic sound and reserved seating for 960 – and height in general, measuring 51 feet from floor to apex.