I should have planned for a longer stay in Austin. I feel I haven’t fully scratched the surface and while I am a huge fan of the city, the State is another matter. I once considered moving to Austin but after an extended drive with friends, I realized California “Sacratomatoville”is a tough act to follow.

In Sacratomatoville, I have many options . When I’ve had enough of heat and the congestion, I have Tahoe or the Ocean  90 minutes away, wine valleys to the north east  and southeast .  The area surrounding Austin is very nice, beyond the area I experienced dust and Oak Trees, its not the same.

But I wanted one more night in the city. A day alone to get lost and meet more of the locals.  Ahhh! next year.

After making my final goodbyes.  I was off to Albuquerque

Highway 183 was a delight, the two lane highway threaded its way through small towns each with its own personalty. Missing on this leg of the trip were the Big Box Stores that follow along on America’s Interstates.    Briggs, Lampasas, Lometa, Goldthwaite , Rising Star and other small towns with banners proudly advertising Football victories ,  local fairs and events. 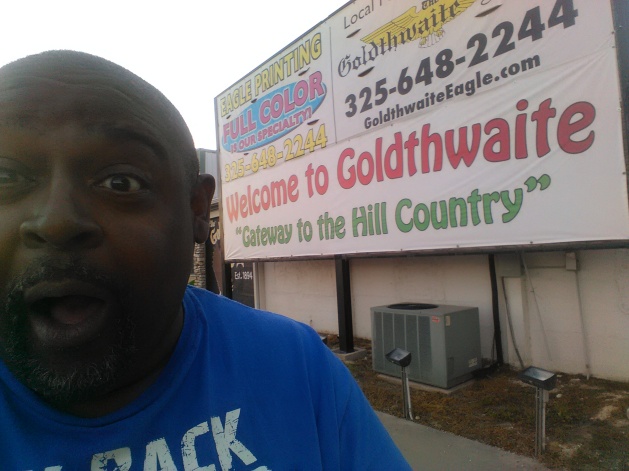 A couple of town had Small theaters and squares filled with people talking . Many of these towns have thriving business districts without a Wal Mart. . Dollar General was the only business the towns had in common.

With the night rapidly approaching, and Albuquerque a few hundred miles away Abilene was going to be my stop for the evening.    After my experience on 183, I will rethink my future road trips.

Its 11pm in Abilene Texas.  I drive into a service station to find a room for the night.  I carefully checked Priceline’s “Express Deals” and ratings..  I’m looking for a deal south of  sixty dollars     By 11:38 I found a room. The review were good, they said clean, nice good value

Outside,  the hotel looked okay, but at night everything  looks okay.   The lobby was nothing special.   Big signs promised a free breakfast, a feast. Everything including Turkey bacon, TURKEY BACON!  Ohh Wee!  The Desk Clerk upgraded me to a King Room.  Yess, score!

I have my keys, time to grab some food.  My Abilene, was dead at midnight. Despite being near the mall, my food choices was the dreaded WhatABurger (shoot me now)  and Circle K.

While the exterior indicates a building about 30 years old it seemed to be okay . Inside, the  hallway and its patchwork network of carpet pieces guaranteed a horror show of a room.

The key is inserted, the green light comes on, the door opens and the smell of Raid is fresh, I turn on the bathroom light and nothing scatters, good. Everything’s dead!

There  is  a large screen TV and one of those pod coffee makers, a fridge and mircowave. I was tempted to check inside the fridge for critters, but I needed my sleep.  The sofa was an afterthought from the Salvation Army.  My drapes, was a piece of fabric with a hole in it. It was cut too small for the window. Robe required .

My favorite feature of the room was un vacuumed line of roach powder that lined the entire room. A white powder to powerful for a Hoover. The  bed was soft,  with all the detailed attention paid to my room I removed the bedspread and  put towels over the pillows.

The bathroom could be called caulking R us. With varying shades of caulk around the mirrors and bathtub.  The bathroom counter was supported by a piece of wood.    After two bites of my WhatABurger I was done.and despite all the praise heaped on the Hotel  by Priceline reviewers , I passed on the Turkey Bacon.