My day started where it ended last night, Central Avenue. This time  near the University of New Mexico.  There are a lot of food options on Central and I chose Mannie’s.   The restaurant  didn’t look like some of the ultra modern eateries and seem to be the perfect place to meet locals and students.    Outside, was a banner that read “No Abq (Art) Rapid Transit. Art=Albuquerque Rapid Transit.  In fact, there were signs all along Central in opposition to Rapid Transit along the street

The City, wants to build a light rail along Central (Route 66). They say right rail will alleviate congestion along the route.  The 10 mile, fifteenth month project will cost $119 million.  The Feds will give the city $89 million towards the project.

Businesses and citizens along Central says light rail is too expensive and the city hasn’t fully considered alternatives.  Currently there are two lawsuit’s to halt the project.  Those who oppose the project ,say’s its a public  nuisance and will have a negative impact on landmarks along the route.   While they recognize there is congestion on the street, they believe electric or clean air buses would be a better alternative.

Well I thought Mannie’s would be a perfect place to here what people think and learn more about the city. Inside was a basic restaurant with Aluminum chairs, on two of the walls were a couple of flat screen TV’s . A very nice and efficient staff greeted me and my meal arrived in mega seconds.  The crowd was mixed, some young, some older, the young eyes were affixed to their smart phones and the older crowd was watching and reading the newspapers.  I wasn’t successful engaging here.

If there is a cool area of Albuquerque, its the Nob Hill Area.  I slowed down as I was driving through the area last night.   It reeks cool, its named after “Nob Hill”in San Francisco. Unique shops, galleries, restaurants it’s a pleasant alternative to chains and malls.  Many of the buildings are from the late 30’s 40’s .  Many of the Motor Lodges and Motels are apart of the Historical Registrar and despite their large footprint wasn’t bulldozed.

Unlike downtown, a new generation has discovered the area and there is development on both side of Central.  From what I can see from the new architecture (condos/apartments) is it compliments the old.  If that’s a city mandate, Bravo.

Albuquerque is wonderfully laid out in a bowl. The elevation of the city is 4900 feet. However in the some of the mountains surrounding the city the elevation exceeds 6700 feet.

In the center of this bowl is  Albuquerque Plaza 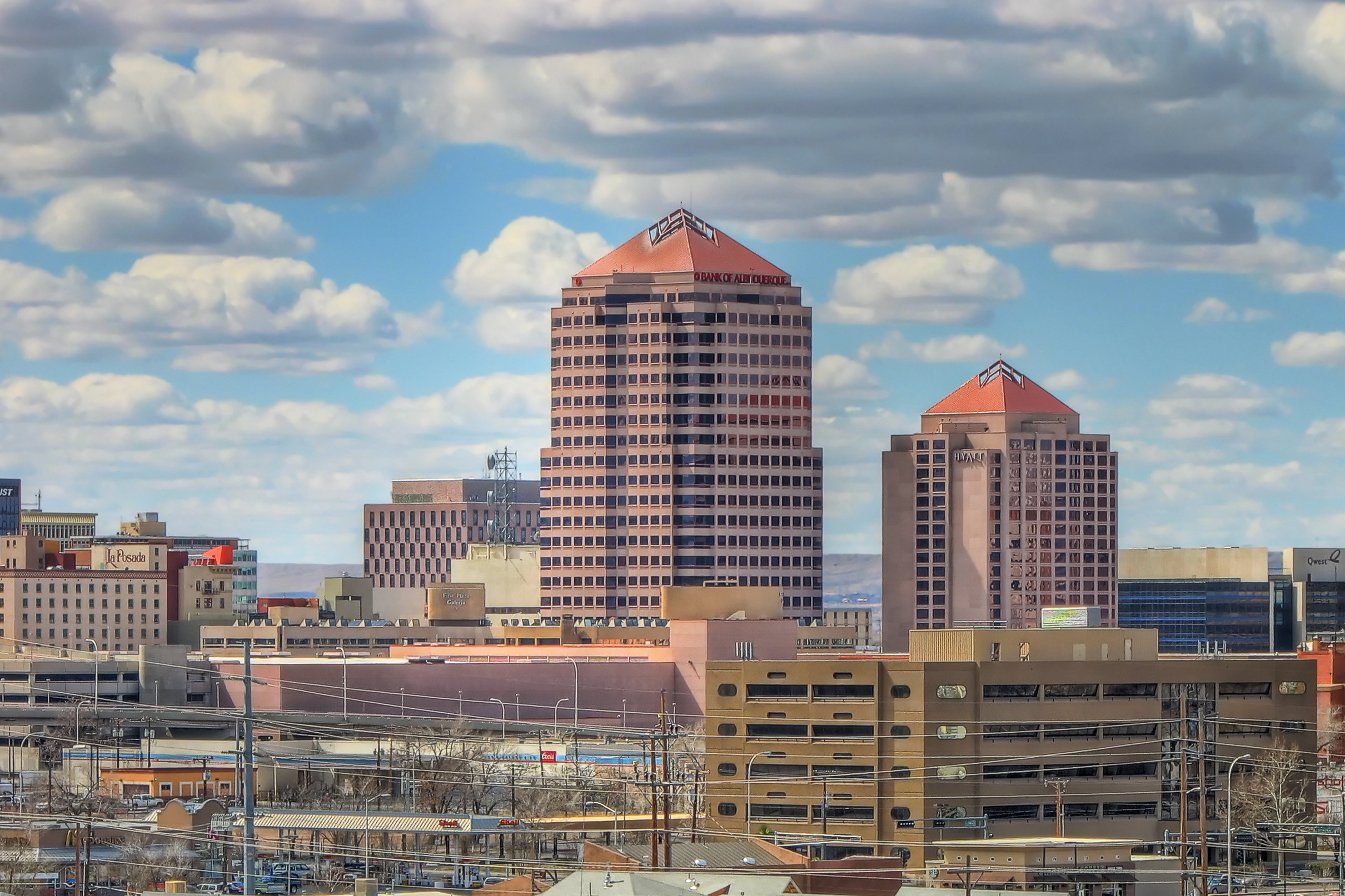 The buildings are the tallest in the state.

The largest employers is the government. City, County, State and Federal . Like Phoenix, it seems a lot of the development took place away from the city center.  Unlike Phoenix and Las Vegas, the absence of rapid development may have preserved the city core and its historical buildings.

Some of the neighborhoods near downtown seems to have of lot of its history intact. Nearly 600, 000 people live in the city.  My first impression of the city is there seem to be  planned growth.

The Tourist Area of City is Old Town

Its a collection of old shops and a lot of southwest trinkets.   Sorry, I was underwhelmed and sadden. As a lot of Native Americans seemed to be dispatched to an area of old town where they were selling their trinkets as they sat on the ground.  (I couldn’t take a picture)

In my very short visit, I’ve  met a little over a half a dozen people. With a couple of exceptions most of the people are from other places.  Art from Lubbock Texas helped a friend move here and never left, that was 2003. Paul relocated from Maryland, he was tired of the congestion and cost of living in the DC area.  He sold his home and paid cash for his home in  Albuquerque and retired at 43.  He likes that Albuquerque has four seasons and while he misses the museums and Italian food, he now lives for Mexican Food. From time to time he is rewarded with snowfall.   Another couple moved here from Las Vegas, Nevada (there is a Las Vegas, New Mexico) after being laid off from the hotel where they both work.  They both found jobs within a week and the rest is history.

One of the questions I normally ask is what the best and worst thing about job.  Weather was first, followed by the pace of the city.   The worst, was the poor (which I didn’t see a lot of ) panhandling and the traffic.

All in all, I liked the people I came across in Albuquerque. There seem to be a bit a resentment of cities poorest citizens.  This isn’t exclusive exclusive to Albuquerque. The poorest of the poor are always blame for the area’s problems.

I’m not sure if I will return to Albuquerque.  There aren’t any negatives that come to mind. There just isn’t’ a compelling reason to visit.  At least not yet.

Having said that, if your in the southwest, shadowing Route 66, or driving through the city. Albuquerque is worth you time. Hotel prices are slightly below average and there is a state museums, a few casinos. You may be impressed.

Did  you know: Filming is big business in New Mexico?  Hollywood drops $150 mil in the state. :  There are currently five TV Show filming in Albuquerque.  Breaking Bad, and this seasons Preacher and others In Abq.     Who Knew?