Asian American and Pacific Islander (AAPI) advocates are speaking out in support of stronger measures to help prevent gun violence as Congressional Democrats staged a sit-in in an effort to force a vote on gun control measures Wednesday.

On Monday, the National Council of Asian Pacific Americans (NCAPA) and 21 of its member organizations issued a statement urging Congress to act. After the Senate rejected four gun policy measures, and as House Democrats began a sit in last Wednesday to try to force a vote on gun control, AAPI organizations pledged continued advocacy in this area.

“We are deeply disappointed that Senate Republicans continue to choose special interests over public health and safety, but this is only the beginning of NCAPA’s advocacy on gun control,” NCAPA National Director Christopher Kang told NBC News. “More than 20 of our national AAPI organizations have joined this debate, representing the voices of nearly four in every five Asian American voters who support stricter gun laws. Although we did not prevail last night, we will not stop until we do.”

According to the Spring 2016 Asian American Voter Survey conducted by APIAVote, Asian Americans Advancing Justice | AAJC, and AAPI Data, 77 percent of Asian-American registered voters support stricter gun laws, ranging from 67 percent of Filipino Americans to 89 percent of Vietnamese Americans. In addition, 74 percent said that gun control was an “extremely important” or “very important” issue in deciding how to vote.

“We are sitting in because we refuse to stand by while Americans die from senseless gun violence,” Rep. Grace Meng (D-NY) wrote in a tweet. 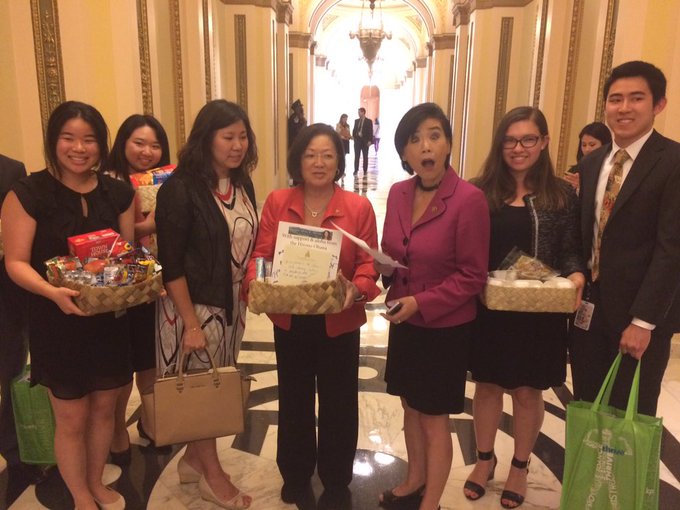 TY so much Sen. @maziehirono & staff for the support & snacks! We’re not going anywhere.#NoBillNoBreak #DisarmHate

Recent high-profile  mass shootings targeting Asian Americans  include the 1989 school shooting at Cleveland Elementary School in Stockton, California — which was the impetus for California and federal assault weapons bans; the 1999 Los Angeles Jewish Community Center shooting, which was followed by the shooting death of Filipino-American U.S. postal carrier Joseph Iieto; the 2012 shooting at the Sikh Gurdwara in Oak Creek, Wisconsin; and the 2014 Isla Vista killings near the campus of University of California, Santa Barbara, which began with the stabbing deaths of the alleged gunman’s three Chinese -American roommates.