The priest of Cuntis, Spain raised eyebrows with his carnival costume choice.
The parish priest from the Galician town of Cuntis has apologized for his “misguided” carnival costume which saw him posing on a float as the Playboy founder along with men dressed as Playboy bunnies.

Juan Carlos Martínez, 40, provoked more than raised eyebrows when he joined the town’s carnival festivities last week and posed on a float dressed as the legendary Lothario, complete with dressing gown, captain’s cap and cigar.

At his sides were two rather delectable companions: Two men decked in black leotards over stockings and a barely-there netting skirt and topped off with bunny ears over colorful wigs. Presumably they also had white cottontails pinned to their backsides.

The trio lounged on red satin sheets on a trailer made out to look like a bed in the Playboy mansion as they were towed through the streets of the town behind a 4X4 in the small town near Pontevedra in northwestern Spain.

At one point, “a bunny” leapt astride “Hugh” and simulated sex.

But while such costumes and high jinks are typical at carnival time, Catholic Church authorities were quick to express their dismay at such ill-advised antics.

Father Martínez was asked to attend a “spiritual retreat” to reflect on “behavior clearly inappropriate for a priest”, according to La Voz de Galicia, 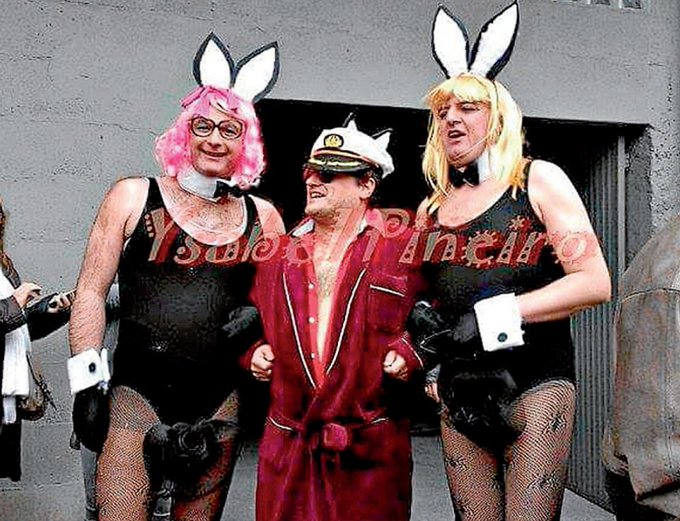 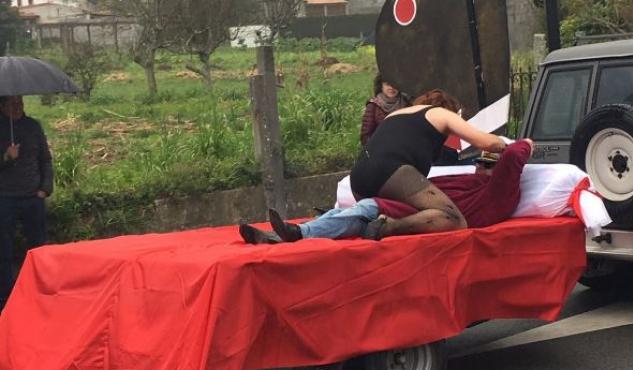 Although residents in the town of 5,000 people, appear not to be offended by the priest’s carnival display, and have spoken out to support him, the priest himself can’t stop apologizing.

“I am so sorry to those who feel offended,” said the repentant curate from the pulpit adding that he had requested an appointment with the Archbishop of Santiago to make a formal apology.

“Such things happen at carnival, it’s just a bit of fun,” one resident said in a TV report broadcast on Antena 3. “He’s a great priest and everyone loves him.”

When a senior priest came to the parish to admonish Father Martínez, he found dozens of residents had gathered outside his home to show their support.

“It’s great that he is well loved by the people he served,”  the senior priest Calixto Covo told La Voz de Galicia, adding that despite the displeasure of the Archbishop there would be no lasting consequences for Father Martínez.