Experts weigh in on tech etiquette for saying sayonara to a relationship.

That’s how Berger broke up with Carrie Bradshaw via a Post-It note on an infamous episode of Sex In the  City  back in 2003. A decade later, he likely would have done it through a text message, instant message, email or heck, even Twitter. But is it really wise to break up with someone in so few words and through such an impersonal form of contact?

“All you have to do is ask yourself if you want to be ‘that person,’ ” YouBeauty relationship expert David Sbarra, Ph.D., argues.

That said, there are cases in which you can absolutely tidily end things via text. First and foremost, if the person has been a real jerk, feel free to curtly cut them loose. Or “[after] one or two dates, then perhaps it’s not a big deal, especially if texting is one of the main ways you communicate,” Sbarra advises. 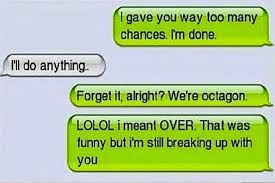 When dating, Dana*, 37, relies on texting her beaus. It makes her feel bolder in the beginning and also, in the end. She has no problem letting go of guys she’s casually dating via text, and on occasion, she’ll even hand over her phone to a good friend to draft the farewell message.

Dana argues, “Why look someone in the eye foran uncomfortable conversation when you don’t have to?”

But karma believers beware: Even though breaking up via text is as easy as typing “C U l8er,” it’s not good form. “This is about showing respect for the other person,” Sbarra points out. “I cannot respect you in 150 characters—it just doesn’t work.”
Stephanie*, 31, was dating a guy for six months when he decided to go on a European vacation and send her an email that he didn’t want to keep seeing her when he got back.

“At the time, I wished he would have approached me more directly,” she recalls. “Breaking up via email or text is cowardly. It allows the person to keep a shield of supposed strength, when in fact it really only disguises weak characteristics.”

Without the chance to get answers, the dumpee can go into a tailspin of whys and what ifs in an attempt to get the closure they crave. We’ve all heard it takes two to tango, so isn’t it only fair that it takes two to break up?

“[Dumping someone] is easier to do in writing, that’s for sure,” notes Sbarra. “And, that’s why so many people do it this way. [A face-to-face break up] might well be hurtful and painful, but that’s part of the pageantry of life.”

Benjamin Le, Ph.D., associate professor of psychology at Haverford College and co-founder of the  Science of Relationships,  would even argue that dumping someone via email or text is actually harder for the dumpee to cope with than saying it to his or her face. “The key [part of a break up] is to give and get closure,” Le notes. “The uncertainty of not knowing why a relationship has ended is one of the problems with a short and impersonal breakup.” 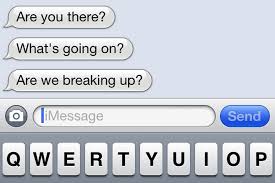 Anika can relate. The 28-year-old, who had already suffered through a break up via a Post-It note (guess that old boyfriend didn’t have HBO), was dumped by another boyfriend via email. They had been together for almost a year and although in the emails he explained that it wasn’t her fault per se and that he just needed space, she still struggled with the break up because she hadn’t got the chance to talk it through with him.
Anika was finally able to move on, but “only after I told myself that person no longer existed and wiped them from my memory.”

If she could do that break up again and have it her way, Anika thinks she might choose to save the time of a face-to-face meeting and have the conversation over the phone. “At least with a phone call it can be done from the comfort of my own home,” she reasons. 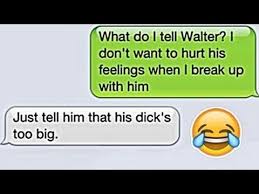 But perhaps the only thing worse than a tactless dumping is no dumping at all. Le points out that study after study has shown that “one of the most hurtful things that one person can do to another is ignore them or give them the cold shoulder.”

With that in mind, Le insists that if you aren’t interested in pursuing a relationship with someone, you have to at least send a polite response text or email declining his or her invitation or communication. It’s absolutely your prerogative to want to break up. You’re not a villain, unless you allow yourself to be cruel with your words or by sticking with the silent treatment.

So when you’re just not feeling it after a couple of dates, Sbarra suggests a simple text will suffice like, “John, I don’t think this is going to work out for us. I am sorry. I wish you the best. Take care.”
Now if you’re on the receiving side, you can still take closure into your own hands. If you receive a beep on your smart phone that turns out to signal a break up message, you have every right to hit reply.
Sbarra says, “Why not send something like, ‘What’s the story? Wanna talk …  like, for real talk?’” And hopefully, you’ll get the closure you need to move on to bigger and better things.