As rhetoric between North Korea and the US ratchets up, should major cities on the west coast be worried about a missile strike? Experts say the answer is tricky 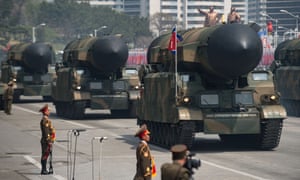 In test blasts, military parades and propaganda videos that show San Francisco and Washington DC in ruins, North Korea has broadcast its intention to be a world nuclear power. Less clear, experts say, is how close the secretive nation is to realizing its ambitions to threaten the mainland of the United States.

As rhetoric between the two nations has ratcheted up in recent weeks, residents of major west coast cities such as San Francisco, Portland and Seattle have begun to ask out loud: should they be worried?

Click on the Link Below for the rest of the Story