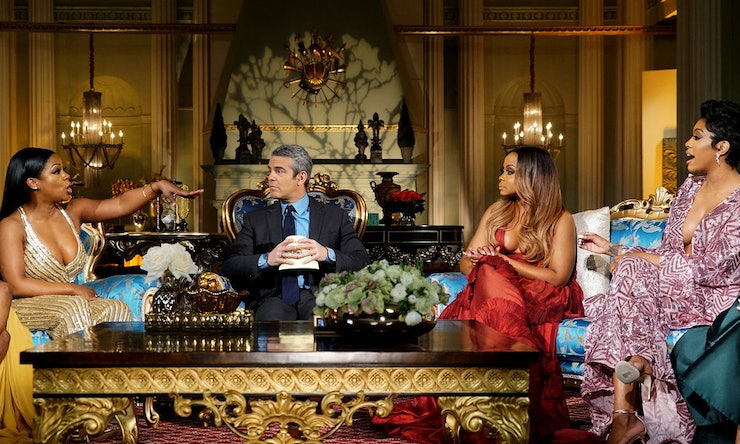 It took two long hours to get tonight and Damm it was Good!  GOOD!!!

It is very clear to me Bob Whitfield would rather be at a day care at a day care facility hand washing diapers ,than to be on the show last night.  He apologized to Sheree for his violent words when they were married. “I made myself the man and kept her behind me,” he said, “when I should have had her beside me.”  Neither he and Sheree have talked to their children about the violence in their relationship.    Cast members like him and was surprised to see that side of him.  Peter said, if he didn’t know Bob,he would have punched him.

Andy asked Todd, his impressions of Riley’s bio dad, Block.  Todd said, he initially thought Block was full of shit but Block is keeping his word and meeting with Riley.

I’ve always thought that Peter Thomas was closest to Nene when it comes to his no nonsense  attitude and his love for his wife Cynthia.   Last night, Peter was sad and angry.

When Andy asked Peter and Cynthia if they were dating.  Cynthia said she dated someone and quickly downplayed the dating.   Peter on the other hand was fronting big time.  He said there was someone he liked a lot.   If you looked close you saw man who’s heart was broken with tears in his eyes and despite his words he said he will ALWAYS love Cynthia.

Peter had nothing but rage toward Porsha and Phaedra.  Porsha has long accused Peter of having affairs. A one point Peter, talked over Andy Cohen, and asked why was Todd not there and insisted he be there ! Then he went after Phaedra.  Do you have the whole package? A husband and a family?  No, Phaedra replied.  Life is full of disappointments baby!    Peter abruptly left the stage as he exited he said “Phaedra and Porsha are full of shit”

Bones and the Bone Carrier

Sheree has clearly earned her peach back and relishes her role as the bone carrier.    Sheree keeps the ladies real, at the end of the day, their gonna see/hear what happens.  The ladies rarely question Sheree.

Ladies and Gentleman, introducing Shamea Morton to the reunion sofa

Shamea Morton has Phaedra to thank for her appearance as she suggested that Shamea  Kandi and Todd was having an affair.   Shamea was Porsha’s best friend and Kandi’s friend however that relationship slowed when Porsha became friends with Phaedra.

Shamea went hard on Phaedra.  She called Phaedra a Southern belle today and hooker tomorrow,” and told Porsha dont leave your credit card and Id because is into fraudulent activity (the crime Phaedra’s ex in prison for) and to stop using Groupon for her plastic surgery’

The big question is why did Phaedra let her good friend Porsha take the fall for her mess?

They brought Todd back to confirm Porsha’s coming on to Kandi.   There were two kisses between Kandi and Porsha asked if they would go back to her hotel.  Todd said Kandi (who was sober) declined and said it wasn’t a good idea.

At one point Andy addresses an open letter written to him from the Huffington Post about  the homophobic way this show deals with these women accusing each other of being lesbians all the time.  Porsha says she is not homophobic, she supports Gays etc, etc, etc,  Someone reminds her of an anti gay statement she made a few years ago

Andy asked, why would Porsha say Kandi and Todd tried to drug her?

Porsha gave us one when she said she is in the world of Journalism.

She reports on the news and they like to make sure it’s accurate.”

Porsha joins the ranks of Barbara Walters and Diane Sawyer.

Why did she say that about Kandi?

“I was served a Cease and Desist by Kandi,” she Porsha said,  “What I want to do is have Phaedra speak, because she’s the one who told me Kandi said that.”

Phaedra is the source of the rumor.   She is the one who said, Kandi and Todd drugged Porsha.

WHERE WILL YOU BE NEXT WEEK?