With the exception of CNN’s  Ana Navarro there was shock, tears and awe on cable news yesterday.   Donald Trump is A racist?

Let’s step into the Wayback Machine

Nov. 21, 2015, Birmingham Alabama: I watched when the World Trade Center came tumbling down. And I watched in Jersey City, New Jersey, where thousands and thousands of people were cheering as that building was coming down. Thousands of Muslims were cheering.”   (The story was a bit of Trumps fake news)

Dec. 7, 2015, aboard the USS Yorktown aircraft carrier in Mount Pleasant South Carolina.   “Donald J. Trump is calling for a total and complete shutdown of Muslims entering the United States until our country’s representatives can figure out what is going on. According to Pew Research, among others, there is great hatred towards Americans by large segments of the Muslim population.” (More fake Statistics)

“The white race is dying out in America and Europe because we are afraid to be called ‘racist,’ says William Johnson, the leader of the white nationalist American Freedom Party. He goes on to bemoan “gradual genocide against the white race,” and how few “schools anymore have beautiful white children as the majority.” He signs off by telling recipients, “Don’t vote for a Cuban. Vote for Donald Trump.”

David Duke, the white nationalist and former Ku Klux Klan Grand Wizard, encouraged his radio show listeners to volunteer for Trump’s campaign. “Call Donald Trump’s headquarters [and] volunteer,” he said on the “David Duke Radio Program.” At Trump campaign offices, he said, “you’re gonna meet people who are going to have the same kind of mindset that you have.”

One the news shows ,Trump denied knowing David Duke but he kept getting tripped up on those pesky vintage tapes of him talking about David Duke in detail.   For weeks candidate Trump would not condemn or disavow Dukes endorsement.

Are you still shocked for just forgot?

It sucks being this guy (the man looking down) 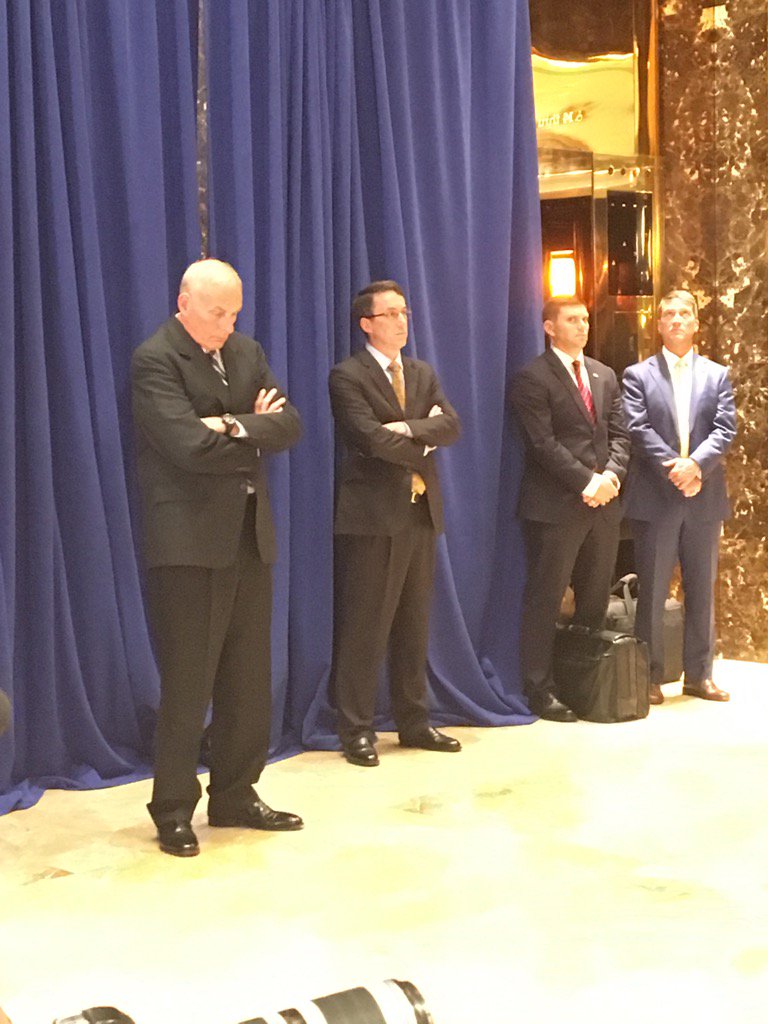 Home General was appointed Secretary of Homeland Security on January 20, 2017, by President Trump. On July 28, 2017, he was appointed to replace Reince Priebus.

Our golden prez would  descend the golden elevators of Trump Tower and step to his golden lobby and there,flanked by his Treasury Secretary, his Transportation Secretary and his top economic adviser. He would highlight the infrastructure executive order he had just signed, and then he’d leave — head back upstairs and deploy his aides to handle any inquiries  slow fade.  Cable News Highlights.

Everything in the Box to the Left

I have a theory.  The Prez was reluctant to criticizes some members of his base.  Under mounting pressure, he was forced to name names.  “White Supremacists” “Klu Klux Klan”  “Nazi’s ”   “Sarah Palin and Kelly Ann Conway”  (Sorry got carried away, not Kelly Ann. )

After caving in ,the press and members of his own party of went into hypedrive. He was soundly attacked for the timing of his revised speech.   Our Prez has a history of holding a grudge and is unable or unwilling to control his emotions.  What we saw yesterday was an angry Prez who basically said FuckIt !   Dammed if I do Dammed if I don’t.

REPORTER: Why did you wait so long ?

While the Prez, concludes the  driver of the car was  a murderer, he’s not ready to call it a terrorist act. Now if it took place in Europe……………

He believe race relations are better or the same since he has taken office.

There is one areas where I actually agree with the Prez.  There was trouble on both sides.   I’m a veteran of sorts.   Not every White Supremacist and those of the extreme right were violent.  However, their are anarchist on either side. I’ve participated in peaceful marches that turned violent after  someone from our side broke a  large window of a business or threw a rock at a police officer.   Individual’s who are looking for a fight  to cause Chaos.  The right was heavenly armed in Chancellorsville, last weekend.  No one was shot.

The difference between to two sides, one side has historically killed people of color, and called for extreme acts of violence against Gays and other Cultures.  They would like to limit the freedoms of people who don’t look or believe as they do.

While President Trump and the truth are in different parts of the world, never to meet.

There was one thing he has never lied about.  His Racism!