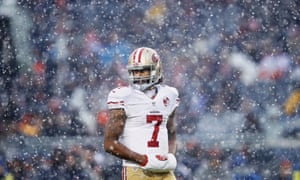 The quarterback is still unsigned but the protest he launched has grown, raising uncomfortable questions about race and activism for NFL owners – and fans

On Wednesday afternoon, the NFL will be forced again to confront a story it must wish to go away. At an hour when the league’s employees should be hustling home from their New York office they will walk into a rallyon the street outside, organized to ask the same inexplicable question that has perplexed many for months.

“Why is Colin Kaepernick  still unsigned?”

The NFL season begins in two weeks and the quarterback who took the San Francisco 49ers to within seven yards of winning the Super Bowl four years ago does not have a job. His absence isn’t difficult to explain. His refusal to stand for the national anthem last year as a way to draw attention to racial inequality in the US has apparently made him toxic to the league’s owners who fear a backlash from white fans and corporate sponsors offended by a perceived lack of patriotism.