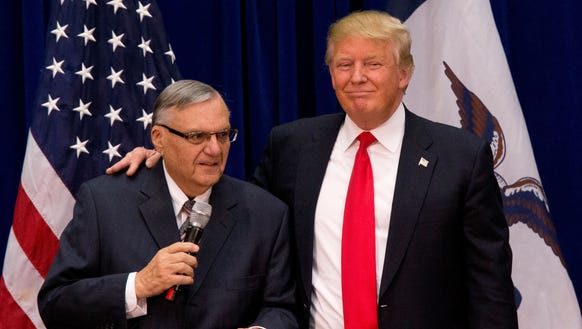 Donald Trump The 45th President of the United States

the action of forgiving or being forgiven for an error or offense.

forgive or excuse (a person, error, or offense).

a person who shows or feels discrimination or prejudice against people of other races, or who believes that a particular race is superior to another.

showing or feeling discrimination or prejudice against people of other races, or believing that a particular race is superior to another.

(in the US) an elected officer in a county who is responsible for keeping the peace.

Joseph Michael Arpaio is a former American law enforcement officer. He was the elected Sheriff of Maricopa County, Arizona, from 1993 through 2016.
July 2017.  United States District Judge Susan R. Bolton found Mr. Arpaio, 85, guilty of criminal contempt of court, a misdemeanor punishable by up to six months in jail.
The criminal charge grew out of a lawsuit filed a decade ago charging that the sheriff’s office regularly violated the rights of Latinos, stopping people based on racial profiling, detaining them based solely on the suspicion that they were in the country illegally, and turning them over to the immigration authorities.
Hearing the suit, another federal district judge, G. Murray Snow, ordered the sheriff  in 2011 to halt detention based solely on suspicion of a person’s immigration status, when there was no evidence that a state law had been broken. An appeals court upheld that ruling, and Judge Snow later reinforced it with other orders.
Mr. Arpaio insisted, publicly and repeatedly, that his office’s practices were legal and would not change, and advocates said the detentions continued.
Judge Bolton ruled that Mr. Arpaio had willfully violated the 2011 court order. “Not only did Defendant abdicate responsibility, he announced to the world and to his subordinates that he was going to continue business as usual no matter who said otherwise,”

Jack Wilenchik, one of Mr. Arpaio’s lawyers, said Judge Snow’s 2011 order “was not clear and definite, and Judge Bolton did not adequately address that.” He added that Judge Bolton had also violated Mr. Arpaio’s rights by denying him a trial by jury.

The former sheriff lost the civil case in 2013, when Judge Snow ruled that his office had systematically violated the rights of Latinos, echoing the findings of a Justice Department report  from 2011.

In 2015, Judge Snow found Mr. Arpaio in civil contempt of court for violating the initial order, and prosecutors charged him with criminal contempt. Mr. Arpaio maintained in both cases that he had not willfully defied the court, and that any violations were committed by his underlings.

Judge Bolton dismissed that claim, citing evidence that Mr. Arpaio understood the order, and noted the several times when he had said he would not change his ways.

Friday, August 25, 2017. President Donald Trump pardoned Joe Arpaio, sparing the controversial former Arizona sheriff a jail sentence after he was convicted of criminal contempt related to his hard-line tactics going after undocumented immigrants.
The pardon is the first of Trump’s presidency, though he did not follow his predecessors’ practice of consulting with lawyers at the Justice Department before announcing his decision.
Under the Constitution, Trump is permitted wide leeway in issuing pardons. There are no requirements for consultation within the administration before a decision is announced.