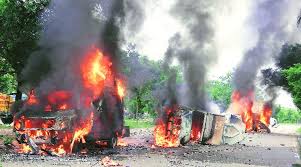 Dera Sacha Sauda followers torched buildings and vehicles in Panchkula after the court verdict against their chief
From: MumbaiMirror
I must admit, I’m a bit jealous of god men. In India, they have a parallel nation where their followers will do anything. If they say, “Today I want you to stop using Indian currency and start using goats as money”, the followers would do it. Common sense suggests government would put their foot down and say, “These people are stark raving mad”. But no, the government’s job then would be to beg the god man to tell his followers to stop doing that and use currency RBI has given.

During the Swachh Bharat campaign, one request from a god man in North India had 5 lakh followers show up in South India on a particular morning to show support. Then there’s my India where I can’t convince five friends to watch the movie on a Whatsapp group. By now, every person in this nation and other countries, and several creatures from the animal kingdom that are fans of Republic TV, know of the arrest of a certain sect leader and the ensuing violence.

The urban educated upper middle class reacted logically – they couldn’t believe that a mob would take the rule of law hostage – was the state machinery useless? What kind of a country are we becoming? We look ridiculous to the world watching, etc etc. I was far more fascinated by a simpler fact. That lakhs of people would take to the streets and become violent just at the idea of their leader being incarcerated.

Just at the thought. Not stopping for asecond to think, “Could this conviction change my opinion of how I feel about my Guru?” or, “How do I as a person, regardless of my devotion, feel about non consensual sex?” Naturally, I am assuming that this god man’s followers are voluntary. I assume these aren’t just mobs or mercenaries paid to be violent. I assume these are people that have jobs and families, that gave all that up and congregated outside a court house to burn things, and will presumably, when their anger has satiated, return to their jobs and incomes.

That’s tremendous faith. I can’t point to one thing in my life that I care about that much (outside family ties say) that would make me burn unrelated city infrastructure. I was really mad when we lost to Pakistan in England in that final but all I could do was break a coffee mug. Which I felt guilty and replaced the next day. It also makes me question how individuals process basic common sense when in a mob.

When one sees thousands of people on any street in our crowded nation, any person would think, these are normal people with normal lives, concerned about income, abiding the law and making do with fate and hard work. This could be me, one thinks. And then in seconds, they could become a group that believes so strongly in something, however bizarre or illiterate, that no tear gas, judge, or law has any meaning.

And then you think to yourself, “Who are these people?” The same people seconds before you thought were just like you. Of course, how burning empty railway carriages and turning over media OB vans is payback for a judgment against your hero is of course another matter (unless you really, for some reason, hate news footage beamed up to a satellite). Faith will always be impossible to understand and no education, law or reason will stop a believer from doing something they believe in. There was once a collective in the former Soviet Union that worshipped Charlie Chaplin.

It worked like any other religion and nothing you could say to them would convince them that he wasn’t God, even when the real Charlie Chaplin came out and said, “Look I’m an actor”. And when you have that kind of belief, followers will listen to anything. I couldn’t get my cook to listen to me, and that’s one person. To have crores of people not only listen to you but be willing to be violent and go against the nation state without exercising any individual thinking – clearly, that means whatever you’re saying to them is working. And clearly, this god man, or any god man, must mean a lot to their followers.

I have a lot of friends who follow Game of Thrones for example. And they are quite upset that a lot of it is censored on television. Could I, however, get 5 of them together outside the Star TV English channel office to shout “Down with cuts” or even burn a poster of John Snow? No. I guarantee you fifteen minutes before, someone would cancel saying they got late at Yoga and someone else was waiting for their Kale salad. Here, 5 lakh people walked twice the length of Mumbai all the way to a court house convinced a man was innocent no matter what evidence, laws, or civilization said.

And when they weren’t happy with the verdict, the enemy was everything surrounding them. Sure one can build digital India, clean India, you can send a thing to Mars and try to teach people evolution and physics but you cannot change fundamental belief. If you’ve decided the man that sang a song about a love charger is your almighty, then that’s what it is. And for this, when a digitizing nation will co-exist with Guru worship, waking up in India one day could feel like the year 2020 and the next day, the year 1529.