Visitors to Arosa’s Aparthaus Paradies shocked to discover anti-Semitic notices, which have now been removed 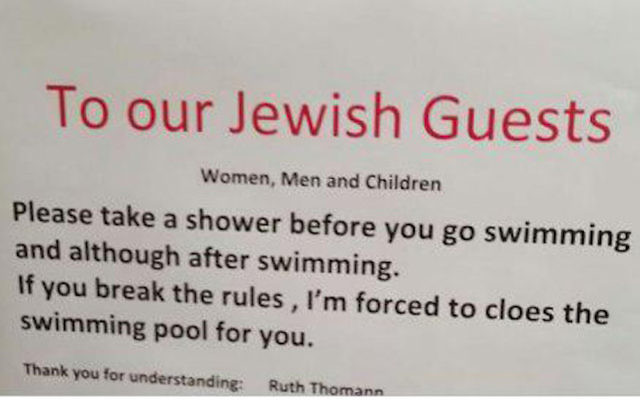 Last month, a hotel in Switzerland put up signs telling “Jewish guests” to shower before swimming, sparking outrage from the guests.

Another sign, this one on the refrigerator, said: “For our Jewish guests: You may access the refrigerator only in the following hours: 10:00-11:00 and 16:30-17:30. I hope you understand that our team does not like being disturbed all the time.”

While guests said they were horrified by the signs and Deputy Foreign Minister Tzipi Hotovely in a statement expressed her outrage at the situation, the hotel said it was a misunderstanding and there was no anti-Semitic intent at all.

“It was very strange and the sort of anti-Semitic incident we have not been exposed to before,” she said.“Everyone had been very nice to us; suddenly we came down and saw the sign, we were in shock,”

Hotovely called the incident “an anti-Semitic act of the worst and ugliest kind.”

Hotovely said that removing the signs was not sufficient. “Unfortunately, anti-Semitism in Europe is still a reality and we must make sure that the punishment for incidents such as these will serve as deterrents for those who still harbor the germ of anti-Semitism,” she said.

Ruth Thomann, the manager of the hotel, confirmed the signs had now been removed. She insisted that many Jews visit the hotel, particularly at this time of year, and they are very welcome.

The hotel was popular with ultra-Orthodox Jewish guests from around the world because it was usually very accommodating to their needs.

The hotel managements said, it meant no harm by the signs. “There was no anti-Semitic intent and the signs were removed,” it said. “We have no problem with Jewish guests at the hotel.”

The hotel explained why, it said, the signs related specifically to Jews.

“The sign on the freezer was hung because only Jews used the workers’ refrigerator,” it said. “The sign regarding the showers was hung after two Jewish girls entered without taking a shower, ignoring a sign addressed to all guests. Therefore, a specific sign was hung to focus their attention on this.”