Marriage equality could be legal by Christmas after 61.6% of participants in the voluntary survey approve a change to the law 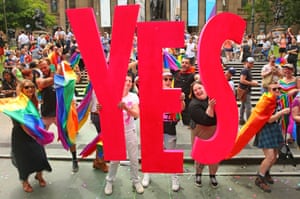 Marriage equality advocates in Melbourne celebrate as the result of the postal survey is announced. Photograph: Scott Barbour/Getty Images

Australia has taken a decisive step towards legislating marriage equality by Christmas after 61.6% of voters in an unprecedented national postal survey approved a change to the law to allow couples of the same sex to marry.

With a turnout of 79.5% the result in the voluntary survey is considered a highly credible reflection of Australian opinion and gives marriage equality advocates enormous momentum to achieve the historic social reform. Australia’s chief statistician, David Kalisch, announced the results at a press conference in Canberra at 10am on Wednesday, revealing 7,817,247 people voted in favour and 4,873,987 voted against.

At a press conference in Canberra, Turnbull said that Australians had “spoken in their millions and they have voted overwhelmingly yes for marriage equality”.

Turnbull said the result was “unequivocal and overwhelming”, implicitly warning conservatives including in his own government that the public are “our masters” and the parliament must now deliver on the result.

“They voted yes for fairness, yes for commitment, yes for love. And now it is up to us here in the parliament of Australia to get on with it, to get on with the job the Australian people asked us to do and get this done,” he said, stressing the law should change before Christmas.

“And I just want to make one promise: today we celebrate, tomorrow we legislate,” he said.

Turnbull, same-sex marriage supporters in Australia’s ruling Liberal-National party Coalition, the Labor opposition, Greens and other cross-bench parties have reached a consensus around a cross-party bill that makes minimalist changes to protect religious freedom without legalizing discrimination by commercial service providers, such as cake makers, as some conservatives in the Coalition government have demanded.

Appearing alongside Turnbull, the finance minister, Mathias Cormann, said the cross-party bill was a “good starting point” but he believed “there is a need for some additional religious protections”, signalling amendments could still be contentious within the government. 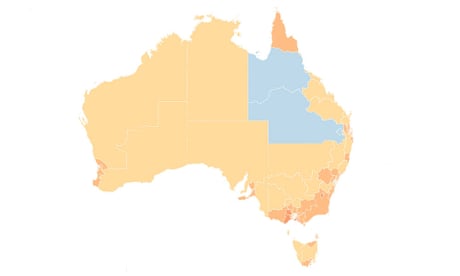 The bill will be introduced in to the Senate on Wednesday for debate on Thursday and Shorten has offered the opposition’s support to help “stare down the conservatives seeking to delay marriage equality”.

A bill is expected to pass, with many opponents of marriage equality in parliament promising to respect the result, although parliament may consider amendments. Coalition parliamentarians, who were previously required to vote against marriage equality will now be given a free vote, Labor MPs are almost universally in favour and a majority of crossbenchers will also support the bill.

On Tuesday, Turnbull said the government “would not countenance”legalizing discrimination against same-sex weddings by commercial service providers and warned a rival conservative bill to do so would have “virtually no prospect” of passing parliament.

In a speech after the result Equality Campaign spokesman, Alex Greenwich, said: “Today love has had a landslide victory.”

“Together we have achieved something truly remarkable, a win for fairness and equality, not only for the LGBTI community and our families, but for all Australians,” he said.

“In doing so it has delivered an unequivocal mandate to federal parliament to vote this through by the end of the year.”

With the positive result, Turnbull, a supporter of same-sex marriage leading a party that straddles both liberal and conservative traditions, looks to have finally achieved a win against reactionaries in his party that oppose the social reform.

Some conservatives have suggested they will put forward their marriage bill in the Coalition party room in two weeks, but senior ministers including Cormann have protected the prime minister’s position by insisting the parliament will choose which bill and amendments to allow.

Same-sex marriage has been banned in Australia since 2004 when the Howard government changed the Marriage Act to define marriage as between a man and a woman. As many comparable countries such as the US and Britain allowed or legislated for same-sex marriage, Australia looked increasingly out of step. After the successful marriage equality referendum in Ireland in May 2015, pressure grew on the Australian government to legislate but the Coalition party room agreed on a national plebiscite instead, although there was no legal requirement to do so.

When Turnbull took the prime ministership from conservative predecessor Tony Abbott. In September 2015, he retained the Coalition’s commitment to hold a national plebiscite on same-sex marriage before changing the law.

Labor, the Greens and other opposition parties blocked the proposed plebiscite in the Senate in November 2016 and August 2017, leading the Turnbull government to launch a $122 million voluntary national postal survey to fulfill its election commitment to give Australians a say.

In a bruising three-month campaign, opponents of marriage equality including the Australian Christian Lobby, and the Catholic and Anglican churches in Sydney, claimed same-sex marriage would have far reaching negative consequences for gender education. Former prime ministers Tony Abbott and John Howard warned that religious freedom and freedom of speech were at risk.

The yes camp’s Equality Campaign combined with moderate Liberals, Labor, the Greens, unions and progressive campaign organisation Get Up to argue that same-sex marriage was a matter of equality and fairness.

The campaign featured everyday Australians, their friends and families, emphasising that the only question was whether LGBTI Australians should be able to marry the one they love.

Despite assertions from Turnbull that the survey would be overwhelmingly respectful , the campaign has been marred by homophobic incidents and campaign material which continued largely unabated despite a special law passed to apply electoral law safeguards to the survey, such as authorization requirements for campaign materials.

The campaign also featured two unsuccessful high court challenges against the expenditure of $122m for the survey, as marriage equality advocates fought to prevent the poll seen as an affront because it determined LGBTI people’s equality before the law by a majoritarian vote.

Public polling throughout the campaign showed consistent support for marriage equality and weekly estimates showed the survey was on-track for a record turnout.

The no campaign took increasingly bizarre turns, with Abbott using an assault that even his attacker said had nothing to do with marriage to rally Australians to his cause, and conservatives attempting to use rapper Macklemore’s performance of his hit Same Love at the rugby league grand final to claim the national campaign they called for had inappropriately politicized Australian institutions.

The cross-party bill will be debated in the Senate on Thursday and the parliamentary sitting week beginning 27 November, with supporters of marriage equality aiming to pass a bill through both houses of parliament before they rise on 7 December.