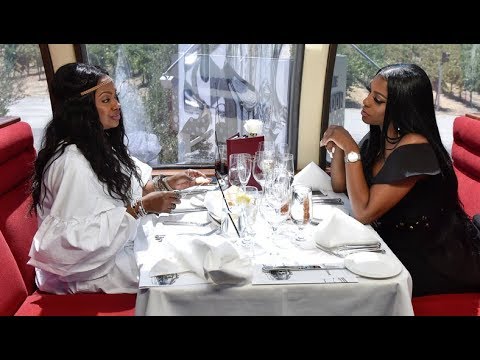 I’m not ready to give Marlo Hampton a peach YET!  But I want more of her and Nene clearly needs her.   As Nene was flapping her gums, Marlo was fixing her wig and her bob that had collapsed on her head.  Marlo not only fixed that wig (how does someone have a problem with a wig?) but she tighten up Nene’s clothes all the while Nene going off on Porsha.

Last night’s episode began where the last episode left off with Nene’s and Porsha’s  petty argument in San Francisco.    While the fight began with the beef between to of them it evolved into Nene’s defense of Kandi.  Nene suggests Porsha’s should have been fired along with Phaedra.   As Nene is being pushed out the door, Sheree stays with Porsha.

The next morning, the ladies board a motorized cable car for a tour on the city.  On the tour Kenya shares pictures of her paternal grandmother who raised her.  Kenya is leaving a day early to attend her funeral.  Kenya’ distress hits Porsha who just lost a family member.   Cynthia notices and comforts Porsha.

Say what you want about Cynthia, but she seems to be the only real adult in Atlanta this season.   She is loyal to a fault, and while Porsha is on the outs with most of these ladies, Cynthia isn’t as cold as say Nene.  She has been drugged through the mud by Nene and tells Porsha its gonna take a while. Nene, hates that Cynthia is no longer following her like a lap dog and she hates being number two to Kenya.

Porsha apologies to Kandi, again. Not sure she is sincere, perhaps she thinks if Kandi opens up a little, the other ladies will come around.  Right now, she is the outcast.

In Chinatown,Porsha, Sheree, and Marlo decide that they should do something nice for Kenya that night since she’s having a hard time.  with a cardboard groom. Someone went on the street and filled the room  with a random gay audience. This could have gone south, but  Kenya went with it .

Porsha Williams shared some of her wisdom with us.   In San Francisco’s Chinatown,she says “I feel like I just stepped out the trolley, and now I’m in Tokyo!”

At  Fisherman’s Wharf, Nene tells her circle that Sheree’s incarcerated boyfriend is a con man who was arrested for conning a company out of “like $4 million.”  We see a flashback when Nene and Sheree was talking about the notorious Tyrone. ,Kandi says, “I hope he don’t con her out of Chateau Sheree.”   Kenya comes quick with  ” Well, it’s not in her name so he can’t do that,”

After a ninety minute bus ride, the ladies boarded a wine train.    After Porsha returns from a restroom break, she finds herself sitting with Kenya and Kandi. Can someone say awkward.    The tension breaks after Porsha orders a Vegan meal and shares that she in now 175 pounds.

Nene who is sometimes the expert on all things told the group Sheree’s boyfreind was in the joint for “tricking the stocks”  Sheree laughs and corrects her “It wasn’t stocks that he went in for it was security fraud and wire fraud!”   GET IT RIGHT BITCH!

Marlo brought her skills to the vineyard.  As the over the top flirty owner was feeding grapes to the ladies, Marlo deep throated the grapes, as to say, bitches this is how you get a summer home.     Grapes are stomped wine is enjoyed all is good in Napa.

Kenya has exited to attend her grandmothers funeral.  With Kenya gone, Marlo  says “Let’s play a game: How many believe that Kenya is really married? Raise your hand,”asked the group, do they believe she’s married? and she shadily thinks its weird Cynthia hasn’t met him.

Cynthia leaves the table and in her confessional says “These girls are a trip; they rained on Kenya’s parade when she didn’t have a man, they rain on it extra hard now that she does have one.”

While it may have been all in fun, Cynthia is a loyal friend and there is a part of her is hurt that her bestie didn’t tell her, didn’t introduce her  didn’t include in the wedding.