My mother said dont, send me flowers after I’m gone.  For months,I had planned to write about Senator John McCain a man I have admired since 2008.  Being the master procastinator I am, I’ve waitied until what could be his final days.

I became a fan of John McCain in 2008 when he was running against Barack Obama.  After defeating Hillary Clintion in the primaries, I chose to support Obama.

I always loved politics.  Politicians generally play it safe, playing to audience where they have support.  John McCain got my full attention when he visited Memphis Tennessee to commemorate the death of Martin Luther King Jr.      Congressman McCain, voted against establishing a holiday for Dr King, saying it wasn’t nessarary to have another federal holiday, it was too expensive and other “President’s ‘ weren’t recoginized.  In fact, Arizona did not honor the holiday until in 1993.

So there he was in Memphis, courting black voters, having a press conference at the Lorraine Motel where Dr King was killed.   There he was in hostile territory being booed and heckled.  He said he was wrong for voting against the holiday.

Now some may say his trip to Memphis was a desperate attempt to woo black voters, others a photo opt.   But I don’t remember a single politician attending an  event where he knew, he would face an hostile audience.  John McCain did!

I later learned he often stood alone. This was evident at a rally where one of his supporters said “I can’t trust Obama. I have read about him,  he’s an Arab.”  Most politicians would have been silent.   But the Gentleman from Arizona corrected her.  He said his opponate was a decent family man, a citizen that he just happen to have disagreements with on fundamental issues.   “He is a decent person and a person that you do not have to be scared of as President ,”  “If I didn’t think I’d be one heck of a better President I wouldn’t be running, and that’s the point. I admire Sen. Obama and his accomplishments, I will respect him. I want everyone to be respectful, and let’s make sure we are. Because that’s the way politics should be conducted in America.

This wasn’t well received by members of his campaign committee and members of his party. In fact, he was bood by some of his supporters in the audience.

I began following the man who was often a thorn for some in his party.  A man who was well respected on both sides of the aisle.

The Senator, the Gentleman from Arizona, stood alone aganist his party as he was one of the few who challenged our current President.  His loyality to the people outweighed his loyalty to his party.

Again, some might say its personal.  The candidate said he wasn’t a hero.  But those who know McCain, say’s it isn’t personal, its John McCain.

These are ugly times in the nation, our leaders have openly participated in dividing a nation.  It’s grade school , where if your his friend, he can’t be mine! Leaders of the parties have said you will NOT be seen socializing or talking to members of the other party. 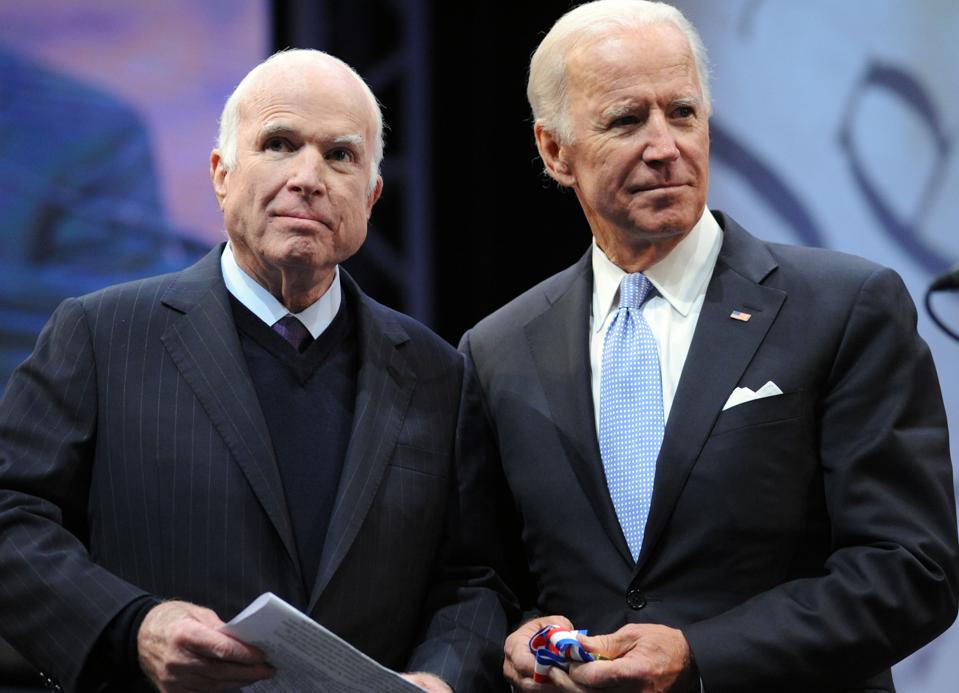 A few months ago, he was diagnosed with an aggressive tumor called glioblastoma a brain tumor.   It was the same tumor that took Biden’s son Drew in 2015.

Biden appeared on ” The View” Wednesday.  McCain daughter Megan is one of the panelist.   Taking her hand he said “One of the things that gave Beau courage was John. You may remember, when you were a little kid, your dad took care of my Beau. Beau talked about your dad’s courage. Not about the illness, but about his courage.”

Vice President Biden,breifly talked about his best friend, the disagreements they’ve had through the years and how solid that friendship is today.

The days have been difficult for the McCain family. After the dianoses, others may have retired, but they aren’t John McCain.   Staffers senses he’s tired, but he smiles and tells jokes.

I have long admired mavericks, individuals who aren’t rubber stamps.  There aren’t enought of them.  It inst easy to stand alone and disagree.  It takes a lot of courage. There are few John McCains in the world.  I hope he survives for personal reasons.  America needs him RIGHT NOW!

I try not to live my life assuming.  Assuming that they know.   Using real words, I tell my family and those in my circle I care for them, I love them.   As my mother said, at the funeral its a bit late.

This is simply a check list for me, all self serving.   I will never meet Senator McCain and he will never see this blog about him and how much I admire him as an invidudual.   All the best to him and his family.