There was a time in America when people lived just outside the Central City. The Central City was the hub for retail and entertainment.

Over time families left the Central  City for larger and less expensive homes in the suburbs and one by one,retail followed them.    I can clearly remember when J.C. Penney’s closed in downtown San Francisco.

The first large shopping center in the United States designed around the automobile is The Country Club Plaza in Kansas City, Missouri. opened in 1923.

In the early days developers built single anchor shopping centers  with one department store surrounded by several smaller stores and eateries on the edge of subdivisions.

The Rise of the Regional Mall and The Fall of Downtown

A regional mall is, per the International Council of Shopping Centers, in the United States, a shopping mall which is designed to service a larger area than a conventional shopping mall. As such, it is typically larger with 400,000 sq ft (37,000 m2) to 800,000 sq ft (74,000 m2) gross leaable area with at least two anchor stores and offers a wider selection of stores. Given their wider service area, these malls tend to have higher-end stores that need a larger area in order for their services to be profitable but may have discount department stores. Regional malls are also found as tourist attractions in vacation areas.  (wiki)

These were mammoth complexes often a half a mile long.  Unlike the older shopping centers,these were placed next to major highways and interstates.  These super regional malls have three or more anchors.

The Regional Mall was responsible the death of retail in many American cities. The mall was sanitized for your shopping experience.   Unsavory individuals were escorted away by mall security in perfectly pressed shirts.   The Mall replicated the central city,  additional to  shopping, one could do their banking, drop of their laundry, mail their letters and get their shoes repaired. See a movie, skate, grab a fast meal or eat in a resturant.  Nearly everything  you can do in the Central City you could do in the climate controlled enviroment.

SunValley Mall was one of the first SuperRegional Malls in the San Francisco Bay Area.  In opened in 1967 with 1.3 million square feet of shopping.   It is nearly twelve times larger than the El Cerrito Plaza.

While there are Regional Department Stores, nearly every mall had one or more of the Big Three, National Department Stores. J.C. Penney’s, Macy’s and Sears. Department Stores were complete back in the day.  In addition to the standard fare Appliances, Electronics, Radios, Records, there were beauty Salons and Restaurants inside the Department stores in the larger malls.  Sears and Penney’s would repair your car as you shopped.

For decades, Sears is where America shopped.  J.C. Penney’s was distant second.  Macy’s was the upscale store.

There were Sears stores in nearly every small and medium town.   If you lived to far from a Sears  retail store you shop at home with the Sears Catalog.  Where one could find anything from Baby Clothing to Tractors.   A stamp and a check and within weeks the items would be delivered to you home .  The Sears Christmas  Wish Book  was a must have.  Filled with toys, and Christmas Ideas

The Rise of the Discounters

In the 70’s, Wal Mart broke the mold.  Many of their stores were built before the  subdivisions.  The land was cheap and there was no competing stores for many years.    They didn’t use the Regional Mall models and built on proposed large roads. Marketers believed the public would make the drive if the prices were low enough.

By the 90’s  Wal Mart, and Target were the number one and number two retailers in the nation.  K-Mart didnt with the times and they lost sales to Target and other discounters.  In 2002 , K-mart filed for Bankruptcy protection.  J.CPenney’s and Sears were closing stores all over America.

The discounters has changed the way America Shops.  Lured by lower prices many Americans where bypassing the Mall and heading to Wal-Mart and Target and other discounters. The Regional Department stores were hit particulay hard. Many stayed in the Central City.

Fresh from bankrupcty. Discounter K Mart set their eyes on Sears.   November 17, 2004, Kmart’s management announced its intention to purchase Sears for $11 billion.  The two chains formed Sears Holdings.       Critics of Sears,  say with rapid diversifcation, the retail side of the company suffered.   At its peak, there were more than 20 subsidiaries from Hardware and Travel Agencies, Home Care Store and Sears Rental Cars

Between 1990 and 2008 more than 40 Regional department stores closed across America. As sign of changing times.     Regional chains like Mervyn’s in the West, Pizitz in Alabama, Zolkower Department Stores in Michigan, Emporium Capwell in California, Davidson’s in Atlanta, dissappeared.    Many of these stores were anchors in shopping malls across America.

1994 saw a merger of Macys with the Federated Department store based in Cincinnati Ohio.   Weakened, many Regional chains merged with Federated Department Stores. In 95 Fedeated Merged with the Broadway Stores ( Emporium, Capwells and Weinstocks )  .  By 2001, they merged with  Hawaii based Liberty House stores .  In 2003, Federated close the large Davidsons chain based in Atlanta.      In 2005, Federated bought the May Department Store chain.  Meier and Frank in Oregon. Hects, Filene’s Davidson and many others.  One by one 330 stores became Macy’s stores    By 2007,  These regional stores had anchor stores also located in the same mall as Macys.  In 2007, Federated Deparment Stores the second largest chain in the nations was renamed “Macy’s Group”    Duplications in the mall resulted in closures. Some of these stores became Macy’s Men or Macy’s Furniture.

Off priced stores like T.J. Maxx, Ross and Marshells opened in older shopping centers and shopping centers where there was an existing discounter.     Not only did these stores chip away at Traditional Deparment stores they also han an effect on the national discounters .

In the mid 90’s few people had heard of Amazon and E-Bay. E-commerce was a notion in the late ninties. Many traditional brink and morter stores opened E-commerce departments however their focus was on tradiitonal sales.

Today, Amazon com is far an away the largest E-tailer its sales is larger then Sears, Macy’s and J.C Penneys combined.

More than 5000 stores closed in 2017.  The mighty Wal Mart is facing completion from the net and other discounters like Dollar Tree and Dollar General who plans to open 900 stores this year.  Wal Mart is opening fewer Supercenters and building smaller stores. The company just announced it will be closing 269 Wal-Mart and Sam Clubs by March.

Once an Macy’s, Sears, or J.C Penney’s closed their doors the mall can expect an 30% drop in foot traffic.   Within a year 30% store near the anchor  will close their doors.  If the anchor is in the heart of the mall the effect can be devastating.    Money magazine predicts more than 25% of America’s malls will close within the next five years.

Macy’s, Sears and J.C Penneys have a presence in nearly every mall in America. Buildings ranging in size from 76,000sf to over 250,000sf.  Real Estate holiding nearly impossibe to sell,  Macy’s with many stores in the Central City is in a better position to sell its holdings.

Survival means smaller stores and a strong Net presence.  The stores will need to appeal to a rapidly changing demographic.

Macy’s saw its holiday sales increase by 1.1 %    While Macy’s marketing is fresh there stores are stale.   Macys’ with real estate holdings central city is probably in the best position financially. 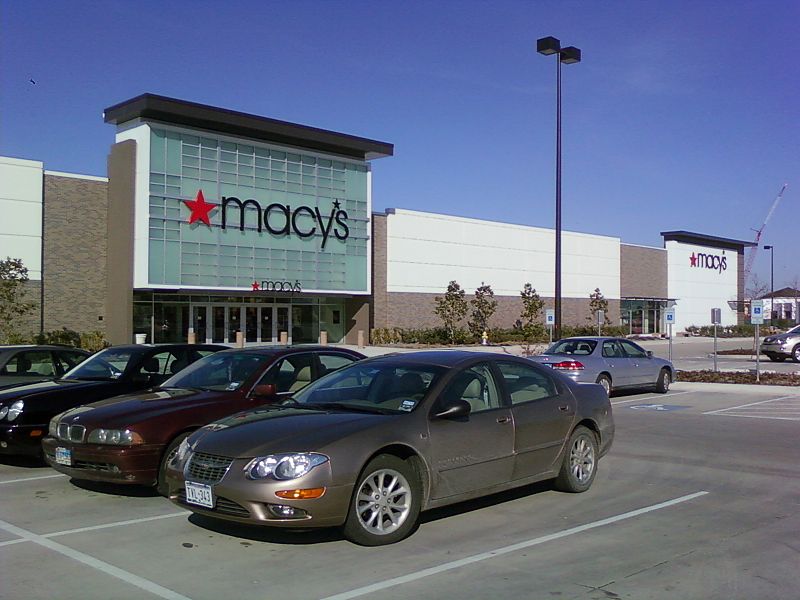 With the exception of its large flagship stores in New York and San Francisco. The company is closing their downtown stores. Most of its other downtown stores may be closed in the next five years . Macy’s plans to close 11 stores nationwide by Spring.

To compete with off price stores like Ross and Nordstrom Rack.  They have opened a few BackStage Stores inside some ot the existing stores.  The are no sales figures available for BackStage.

The bright note for Macy’s ,is its E-sales, which is up 29%.  However the increases by its E-Sales could not stop the slide from its brick and morter stores.

Sears is bleeding in every direction.  Where Macy’s and J.C Penney’s saw small increases this year.  Sears sales has dropped by as much as 17% The stores did not change with the times.  Sears says it will close 39 stores by April.  Sears is still the place where America buys its Appliances, Tools, and Mattresses.  However, the rest of the retailer is a mess.   It wants to downsize,  It would like to open smaller Appliance stores. But unlike Macys it doesnt have extensice real estate to sell.  Unlike Penney’s there hasn’t been changes within the stores.    The once mighty retailer didn’t change with the times.  This is true of  K-mart. In 2018, Sears still have Catolog Stores in this Internet world.

Experts thought J.C Penneys was going to go to Department Store heaven by 2013.  A New CEO tried to resphape Penneys and retail.  The results were disasterous. He was replaced, and a new CEO was installed.   The stores have a bright and fresh look to them.   While the sales slippage has slowed, Penney’s still suffer with the same problems the plague the industry.   While Macy’s E-Sales department is very sucessful,  Penney’s E-sales are flat.    J.C Penneys downsizing started before Macy’s and Sears.  J.C Penney’s  opened more new stores  in the big box  format than Macy’s and Sears.

Two years ago, Perhaps in an attempt to get Sears Customers.  J.C Penney’s began selling Major Applianaces, the last time Penney’s sold appliances was 1983.  During the Holiday season J C Penney’s sales increased 3.4% the highest of the big three.   There are no planned closers for the first quarter of 2018,

J.C Penney’s, Macy’s and Sears are apart of the fabric of America.  All the stores are one hundred years old.  Generations of Americans have shopped at these stores.