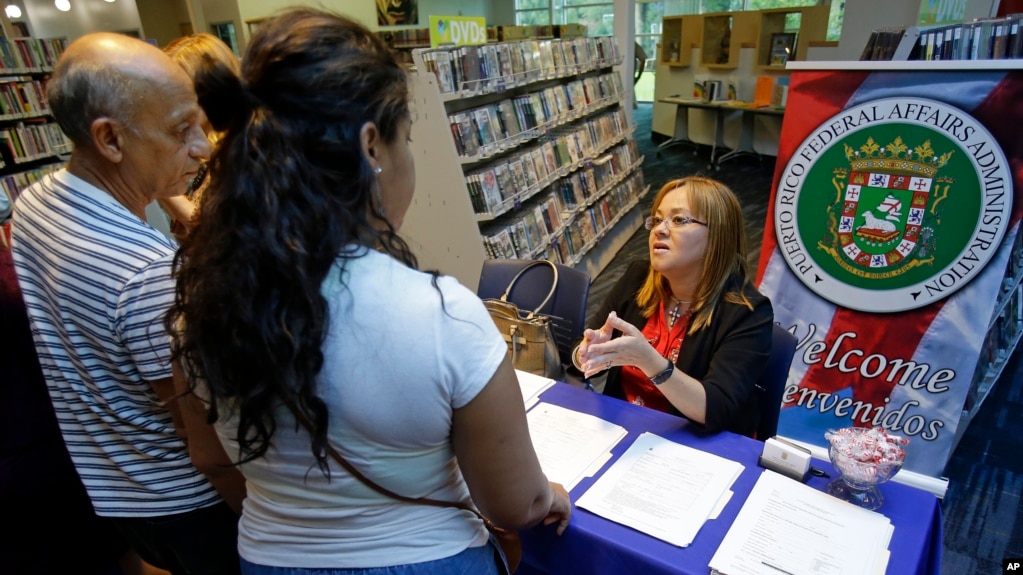 Since 1936, Florida has picked the winner of the presidential election 19 out 21 times and in no other state has the Hispanic vote proved more valuable in helping determine who will lead the nation for the next four years.

Hurricane Maria continues to ravage Puerto Rico.  Nearly a half million americans have been without power  for more than four months.  Thousands of homes still need repair many are without roofs.

Over two hundred thousand Puerto Ricans have moved to Florida since Hurricane Maria.  Florida’s govenor Rick Scott says the number is closer the 300,000.  Scott’s number represents people on commercial airlines flying from Puerto Rico to Orlando, Miami and Tampa — a statistic tracked by the Florida Division of Emergency Management. So it would include businesspeople, journalists, aid workers, contractors, government employees and possibly travelers who connected at Puerto Rico airports from other points of origin.

There’s really no whole number that is reliable yet, said Rich Doty, GIS Coordinator & Research Demographer at UF’s Bureau of Economic and Business Research. The most accurate number is from schools, where children from the island are new registrations. Statewide, that number is about 11,200 for arrivals from Puerto Rico and the much smaller Virgin Islands.

The actual number may not be known for months.   Since Puerto Ricians are US Citizens they are not required to register.  Many are staying with families in Florida.

Bloomberg says, an estimated 600,000 people plan to leave the island by 2022.   On Wednesday,  Puerto Rico’s Govenor Ricardo A. Rosselló announsed the island will not be able to pay down any portion of the islands more than $70 billion debt for the next five years because of the damage brought on by Hurricane Maria.

Just before the hurricane, Puerto Rico had made plans to pay creditors a total of $3.6 billion through 2022. That was a fraction of the amount due, had the island, a United States territory, not gone into default.

Nearly half of Islands population live in poverty prior to the hurricane. The unemployement rate is currently 11 percent.

Before Maria, Puerto Ricians were leaving the Island with Orlando being the most popular destination. Orange County Tax Collector Scott Randolph had reported more than 20,000 Puerto Rico residents moving to the county in the 12 months before Maria.

In May of 2016, The Wall Street Journal editorial board warned that if Congress failed to pass a bill addressing the island’s debt crists on Puerto Rico would result in thousands of Puerto Ricans moving to the US mainland which could make Florida a Democratic stronghold.

The challenges posed by such a mass emigration are two-fold, according to the Journal. One, it could increase costs to the federal government as Puerto Ricans rely on public assistance to help reestablish themselves on the U.S. mainland.

“While many will eventually find jobs in the U.S., their incomes will at least initially be low enough to qualify for Medicaid, food stamps and public housing. Their kids will attend public schools.

“A congressional default would relegate the island to economic paralysis, and Florida and Puerto Rican voters to the Democrats for years to come,” the Journal warned.

Last October President Trump told Fox News’ Geraldo Rivera “We have to look at their whole debt structure,”  “They owe a lot of money to your friends on Wall Street and we’re going to have to wipe that out.” The president added that “you can say goodbye” to the island’s existing debt, regardless of how it may affect companies on Wall Street like Goldman Sachs. Puerto Rico filed for bankruptcy in May.’

The writing is on the wall, Puerto Ricans will soon displace Cubans as the largest Latino group in Florida.  In 2016, Puerto Ricans in Florida overwhelmingly voted for Hillary Clinton.  Puerto Ricans are an attractive group of voters because of their high participation rates and their ability to group together as a voting bloc.

Groups like “Mi Familia Vota” plants to register 25,000 Latinos to vote in 2018. Nearly half of those will be Puerto Rican.

In 2016, many Puerto Ricans were offended by Candidate Donald Trump Mexican comments.

This year, Floridians will elect a new Governor, U.S. Senator send a few members to the House. What role ,will the Presidents negative tweets about the island and San Juan’s Mayor have on the elections this fall?  How RED is Florida? Details this Fall.