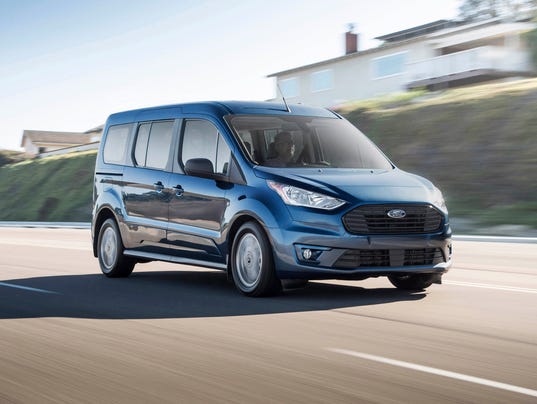 Ford is to unveil its redesigned 2019 Transit Connect Wagon on Thursday at the Chicago Auto Show, positioning the seven-passenger vehicle as an affordable alternative to the minivan for entrepreneurs, pet owners and grandparents.

“Not everybody needs the DVD player and built-in vacuum,” said Sam Locricchio, Ford product communications manager. “You know what? We sell a lot of these bad boys.”

With a segment-exclusive diesel engine and new driver-assist technologies, the vehicle can be used to haul both passengers and cargo.

“We’re living longer. We’re working harder. We’re changing careers and people now have their own side businesses that relate to their passions, whether it’s painting or antiquing,” Locricchio said.

Karina Shaughnessy, 36, a pharmaceutical report writer from Paw Paw, said she can’t do without her 2016 Transit Connect Wagon purchased last June. “I travel a lot with our three Border Collie mixes and compete in dog sports, primarily disc (Frisbee) dog sports. So we needed something that could hold three dog crates, two adults, a 9-year-old child and all our stuff while getting great gas mileage.”

The family likes its 2011 Dodge Caravan, but the vehicle lacks needed space. So their 2012 Toyota RAV4, which “only held two dog crates,” was replaced. Other sport dog families recommended the boxy Ford. 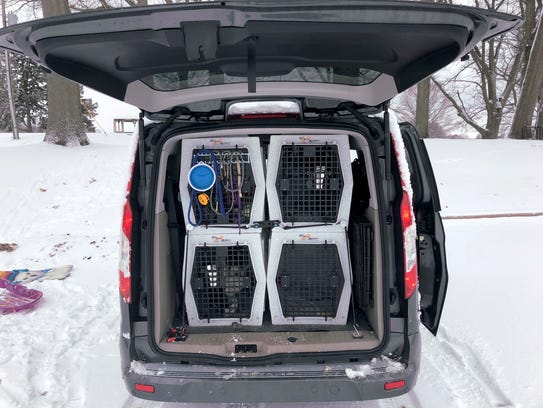 In addition to pet owners, the Dearborn-based automaker is trying to appeal to consumers born from 1946 to 1964.

America is home to 111 million baby boomers who control a vast majority of the nation’s spending power. And one in three boomers plans to purchase a vehicle in the next three years, according to AARP.

Kevin Brown, 63, a graphic artist who lives in the Houston suburb of Nassau Bay, Texas, uses his 2013 Transit Connect Wagon to haul surfboards on weekends with his wife, deliver custom T-shirts to clients up and down the Gulf Coast and shuttle his nine grandchildren.

“Unlike most people in Texas, I don’t have much use for a pickup. Everything I carry can’t get wet. I have to keep everything dry for business,” he said. “This has dependability, comfort, fuel efficiency and whatnot. I used to drive VW buses. This has more volume and lower floorboards for loading. The doors open and just get out of the way for my dolly or whatever I have.”

“Customers pay for what they need and not for what they don’t,” said Imran Jalal, Ford commercial vehicle brand and communications manager. “These customers are on a tight budget.”

He noted that 63% of new vehicle buyers are aged 50 to 68. And that group purchases 6.2 million vehicles annually, far more than other demographics. Ford is looking at a market of 17 million drivers over 50 during the next decade.

“Baby boomers are the first generation that regularly changes careers after age 50,” Jalal said. “That means they may want to convert their vehicle from a people mover to a cargo van for small businesses.”

The 2019 Transit Connect Wagon has up to 2,000 pounds of towing capacity with the available tow package, and a better payload than a diesel-powered Ram 1500 traditional pickup, he said.

“This is for baby boomers moving into a new phase of life,” Stoehr said.

“This applies to a part of the market that’s underserved,” she said. “You can go with a pickup truck, but there’s not really a similar product from other manufacturer in the market.”

While a price has not been revealed, Ford promised that it would be one of the most affordable seven-passenger vehicles in the United States with more cargo volume behind the first row than a Chevy Tahoe.

The Ford Transit Connect Wagon is built in Valencia, Spain.