The bodies of Jennifer and Sarah Hart and three of their children were found in and around their SUV.

We may never know why Jennifer and Sarah Hart’s SUV plummeted 100 feet over a cliff, killing the couple and three teens. Or whether their three other children are dead or alive.  But new details about the mysterious family reveal a troubled history. Here’s what we know about the couple and their six children:

All 6 children were adopted

Three of the children were adopted in Texas in 2006 — siblings Abigail, Hannah and Markis, said Tiffani Butler of the state’s Department of Family and Protective Services.
Then another trio of siblings were adopted in 2009 — Sierra, Jeremiah and Devonte, Butler said.  It’s unclear whether one or both of the Hart women adopted the kids. 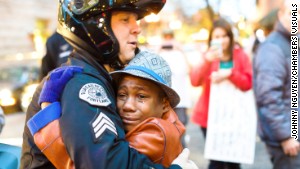 In 2014, Devonte garnered national attention when he embraced a white police officer during racially charged protests.
The nationwide protests followed a grand jury’s decision not to indict the white officer who killed Michael Brown , an unarmed black man in Ferguson, Missouri.  Devonte helped quell tensions with his sign offering “Free Hugs,” and his photo was shared around the world.

Nearly four years after that iconic photo, Devonte and two of his siblings are nowhere to be found.
After the family’s SUV crashed on the Northern California coast, the bodies of Jennifer and Sarah Hart were found inside March 26. The bodies of Markis, 19, Jeremiah, 14, and Abigail, also 14, were found nearby.
But there was no trace of Devonte, 15, Hannah, 16, and Sierra, 12. Those children may have been left behind with friends, Mendocino County Sheriff Tom Allman said. Or they may have been killed when the SUV tumbled into the sea.

There were no skid marks

Perhaps the most troubling clue is what investigators didn’t find.There were no skid marks or brake marks in the area leading up to the fatal crash.
And there were no witnesses to help guide police on what happened. The SUV was discovered only after a passer-by saw the mangled wreckage below the cliff.
Data from the vehicle’s software air bag module and software suggest the car had stopped at the scenic highway outcrop overlooking the cliff and then accelerated off the road, said Greg Baarts of the California Highway Patrol’s Northern Division.
And that leads police to believe the crash may have been intentional.
“At this point in our investigation, that is the direction we are going,” Baarts said.

Jennifer and Sarah Hart once lived in Minnesota, where Sarah Hart pleaded guilty to misdemeanor domestic assault involving one of the children in 2010, according to Douglas County court records.
That child had told an elementary school teacher of pain in her stomach and back, and bruises were discovered. Sarah Hart told police she had spanked the child over the edge of the bathtub because of the child’s behavior. She was sentenced to community service and one year of probation.
Then, about 10 months ago, the Harts moved into their home in Woodland, Washington, neighbor Bruce DeKalb said. He said the family was “very private.”
Another neighbor, Bill Groener, said the children were home-schooled and kept inside most of the time.

DeKalb said Devonte and one of his sisters had told him they were being mistreated. The neighbor recalled two disturbing encounters he had with the children.
“One of the girls came to the door at 1:30 in the morning and said that she needed help and the parents were not treating her properly, and (she) wanted us to protect her,” DeKalb said.

(Devonte) started coming over asking for food and saying that they were taking meals away from him due to punishment.

“We ended up getting her back to her parents … and then I went over there the next morning and just checked on things, and everything seemed normal, and we let it go from there.”
DeKalb said Devonte was the only child he saw doing chores outside, such as taking the garbage bins to and from the street.
Then, starting about two weeks ago, Devonte “started coming over asking for food and saying that they were taking meals away from him due to punishment,” DeKalb told HL”It started out as one time a day and escalated up to three times a day, until a week went by and we decided that we needed to get professional help.”
DeKalb said he called Child Protective Services on March 23, and officials arrived just after Jennifer Hart came home from work. But she didn’t answer the door.
Sarah Hart came home soon after, DeKalb said. By the next morning, the family and their vehicle were gone.
Child Protective Services tried to visit the family twice more, on March 26 and 27, but couldn’t make contact, the Washington State Department of Social and Health Services said.
The department said it had no prior history with the Hart family. But the search continues for the three missing children.