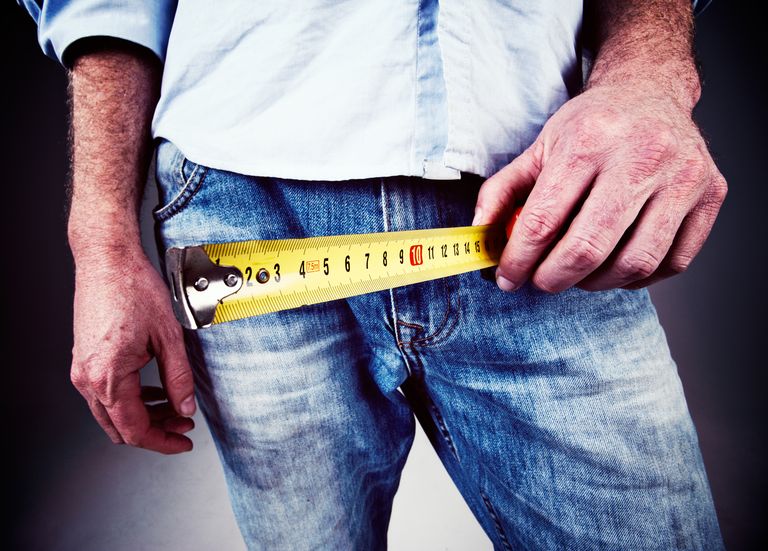 When erect, average penis size swells to 5.2 inches in length and 4.6 inches in circumference. Penis size is one of the most common sources of insecurity for men. Though how much you’re packing downstairs is in no way indicative of one’s character, many perceive this to be the case, and there’s no telling how many men have purchased sports cars, motorcycles, or phallus-shaped yachts in an effort to add a few extra inches to their manhood.

Regardless of how well endowed you may be, we know that at some point you’ve unfurled a tape measure and tallied just how big you are below the belt. You know your measurements, now how well do you stack up?

According to a review conducted at King’s College London and published in the British Journal of Urology International, the average penis size may not be as big as you think, a revelation that is sure to make every man feel a little better about their member.

Researchers combed through 17 studies that examined the penis size of more than 15,000 men. They found that the average flaccid penis length—from the base to the opening on the tip—was 3.6 inches, and the circumference, measured around the base or mid-shaft, was 3.7 inches. When erect, average penis size swells to 5.2 inches in length and 4.6 inches in circumference.

Wonder how you fit in? Here’s some more context: Guys in the 95th percentile for erect length—meaning out of 100 men, only five would have longer penises—measured about 6.3 inches. Men in the 5th percentile averaged about 4 inches. In other words, anything between around 4 inches and 6.3 inches when erect covers 90 percent of guys.

Anything between around 4 inches and 6.3 inches when erect covers 90 percent of guys.

The researchers also explored some of the most common “indicators” of penis size to see if there was an actual connection. Height was slightly related, meaning that the taller men were, the larger their erect penises tended to be—but only to a small extent, says study author David Veale, M.D.

On the other hand, other measurements that have been thought to point to penis size were actually pretty useless. Factors like a guy’s weight, length of his index figure, and foot size weren’t consistently predictive.

Even if your penis size is a little shorter than average, that’s no reason to worry: “That’s not an issue to 85 percent of women,” says Dr. Veale. In fact, women might actually prefer smaller penises. Bigger isn’t always better.

Wherever you fall on the penis spectrum, you can maximize your pleasure by picking the best sex positions for every penis size. No sports cars or motorcycles required