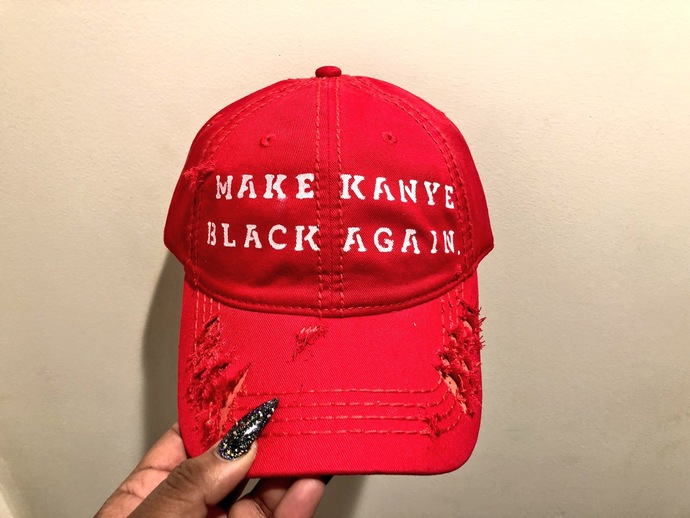 You can actually purchase this hat online.  There are “Make Kanye Great Again” Tee shirts.

Kenya is a proud black man.

You don't have to agree with trump but the mob can't make me not love him. We are both dragon energy. He is my brother. I love everyone. I don't agree with everything anyone does. That's what makes us individuals. And we have the right to independent thought.

Kanye West is an American Citizen first and performer second.  As a citizen, he is free to join any political party he chooses.    However as a citizen and a performer, he risks alienating his fan base.

His support of President Trump is curious.  Many years ago Mr West called then President George W. Bush  racist, due  on his lack of support for the Katrina victims in New Orleans.  When President Trump and his father has a long history of discrimination against blacks and other minorities and there lies the outrage.

You don't have to agree with trump but the mob can't make me not love him. We are both dragon energy. He is my brother. I love everyone. I don't agree with everything anyone does. That's what makes us individuals. And we have the right to independent thought.

I agree with Chance the Rapper, when he says “Black people don’t have to be Democrats “  I think some of his fans  might forgive Kanye should he chooses to become a Republican.

The outrage is the support of an individual who’s has supported white supremacists, reportedly called African Nations shithole nations and systematically dismantling existing programs that effect  LGBT communities and People of Color.

I imagine there's some comfort in imagining a future without racism and projecting that onto the present. Thinking if we just deny the truth, it doesn't exist. If history is erased, we don't have to deal with its consequences. However…

Far too many people don't have the luxury of closing their eyes and ears. They feel it in their lives and can't act like what they see and know doesn't exist.

I love that great, brilliant artists have the power to imagine a better future. But artists can't be blind to the truth.

*Gets inspired
*Starts writing ‘Get Out 2’ https://t.co/zqOW6Xxx9v

I love Ye…however the only reason I’d talk to him is so that I could tell him to give Cudi the phone. https://t.co/iOs3cnVN9s

Black people don’t have to be democrats.

frank ocean just posted this on tumblr!! kanye is over!! pic.twitter.com/EgrvQCFdVg

I’ve never been a fan of Kanye West his talent is undeniable, I struggle with his narcissism , much like the narcissism of our President. However while I don’t agree with his admiration of Donald Trump, I admire his courage.   A few years ago I admired the courage of the Dixie Chicks.  You remember the Dixie Chicks.  Google um.