Men dressed in traditional attire “chulapo” take part in the San Isidro celebrations. Photo: AFP
With longer and warmer days, May is the month when Spaniards take to the streets to throw fiesta after fiesta.

The citizens of Cordoba will be competing for the prize of who has the most lush courtyard, decorating their patios with bright flowers, leafy green plants, fountains and more. The tradition dates back to 1921 with the town hall organizing a competition, along with music, dancing and wine.

Originally a livestock fair, the wonderful feria of Jerez is much more open than its more famous cousin – that held in Sevilla – as the casetas (temporary structures) are public so anyone can walk in and enjoy the food, drink and the dancing. Expect endless glasses of fino and dancing until dawn.

For five days in May, the medieval city of Segovia is transformed in this annual event for puppet enthusiasts. International puppet theatre groups stage performances across the city from traditional puppetry, to street theatre to acrobatics. Fun for all the family.

San Isidro is the patron saint of Madrid and May 15th is a public holiday for Isidro in the capital, though the celebrations usually kick off the week before and last until the Sunday after. Locals dress up in the typical chulapo and goyesco costumes, and dance to the traditional chotis in squares across old Madrid. It’s also the start of the prestigious bullfighting season at Las Ventas.

For a few days in May, walking through the old walled city of Ibiza is like stepping back in time. The streets are filled with craft markets, wizards, witches, knights, princesses, princes and dragons. With displays of falconry, jousting tournaments, jesters and jugglers. All accompanied, of course, by wonderful food and drink. 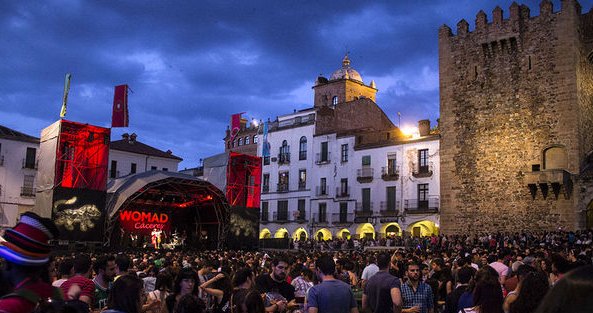 Cáceres in Extremadura offers one of the world’s more unique music festivals as it is set within the historical walled city. And the three-day festival is completely free!

The most famous of Spain’s Romerias, El Rocio attracts some one million people on a pilgrimage to the saint, with some travelling on horseback, other by carriage or on foot dressed in traditional flamenco-style outfits. Expect live music, dancing, food and drink until well into the early hours.

For three days, thousands of locals from Lleida in Catalonia celebrate the gastronomic delicacy, the snail!. More than 200,000 people take part in the fiesta, consuming around 12 tonnes of snails. But there’s also music, fireworks and lots of fun street entertainment.

A chance for tennis fans to see Rafa Nadal play on his home turf (clay) in this Masters competition. Held in the Caja Mágica, the tournament attracts all the big names from the tennis circuit.

The Formula 1 race held at the Circuit de Barcelona-Catalunya is one of the oldest in the world and celebrated its centenary in 2013. A must for petrol heads.